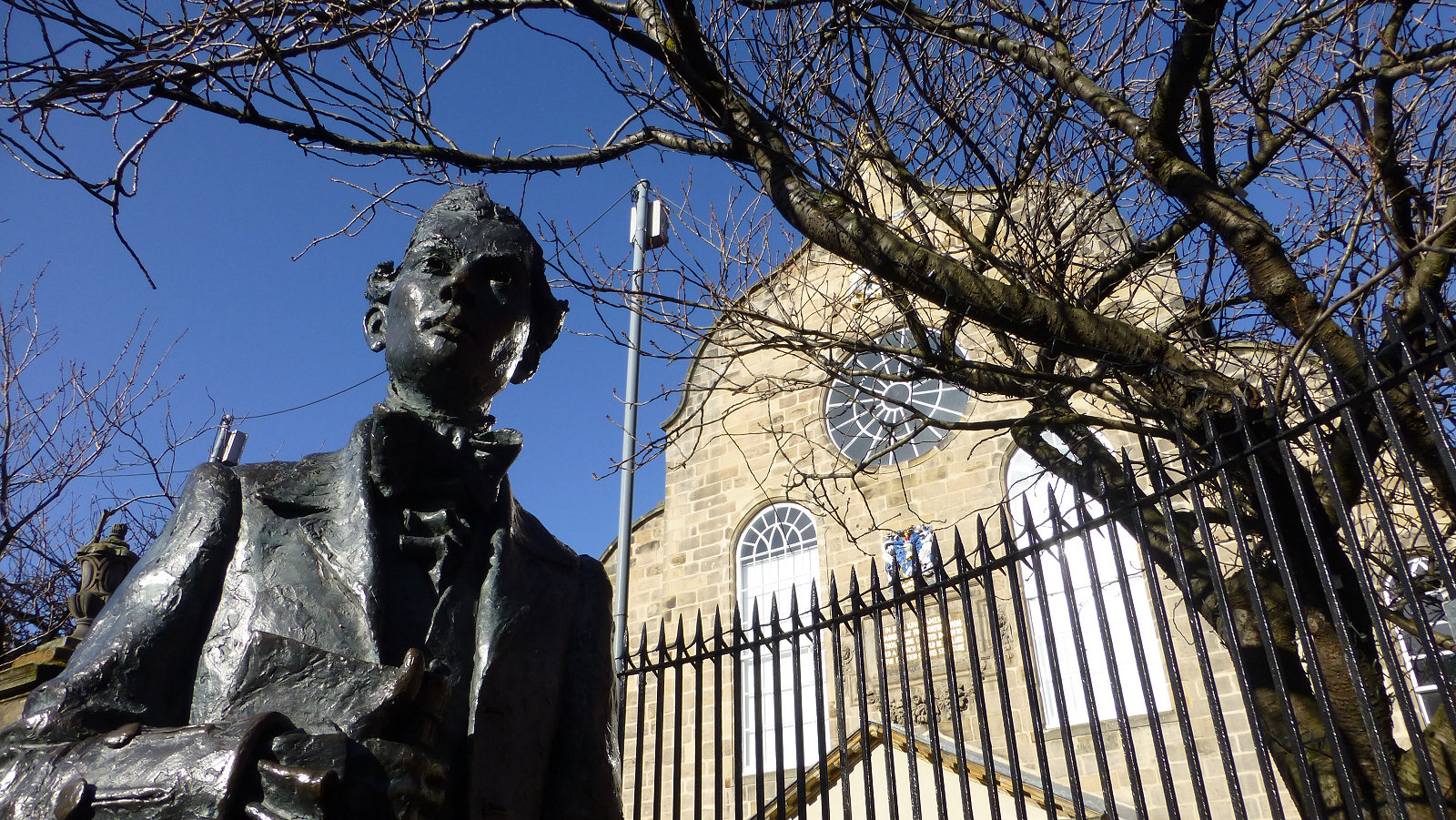 Yesterday’s thinking was to take the Surly Pugsley fat bike along the East Lothian coast to Gullane and pick off a few of the recent zones that have appeared in the area. However, I just wasn’t in the mood for hard cycling today, and riding a fat bike across loose sand in near-storm force winds and chilly temperatures, is hard cycling indeed. That will be a trip for a warmer day, hopefully in the not too distant future, a day for shorts and t-shorts. So, today, I jumped on the No 31 bus and headed for Auld Reekie, in other words, Edinburgh. The name Auld Reekie comes from the time when the city buildings were black with soot from coal fires and industry.

First stop was the Alpkit shop in the Newington area, to look at waterproof trousers for cycling. However, I left empty-handed. I wanted to see their Parallax waterproof trousers as they looked a good fit for cycling. Guess I’ll have to try online. I can always send them back if not suitable. Leaving the shop, the rain started, just as I was about to start turfing. Typical. 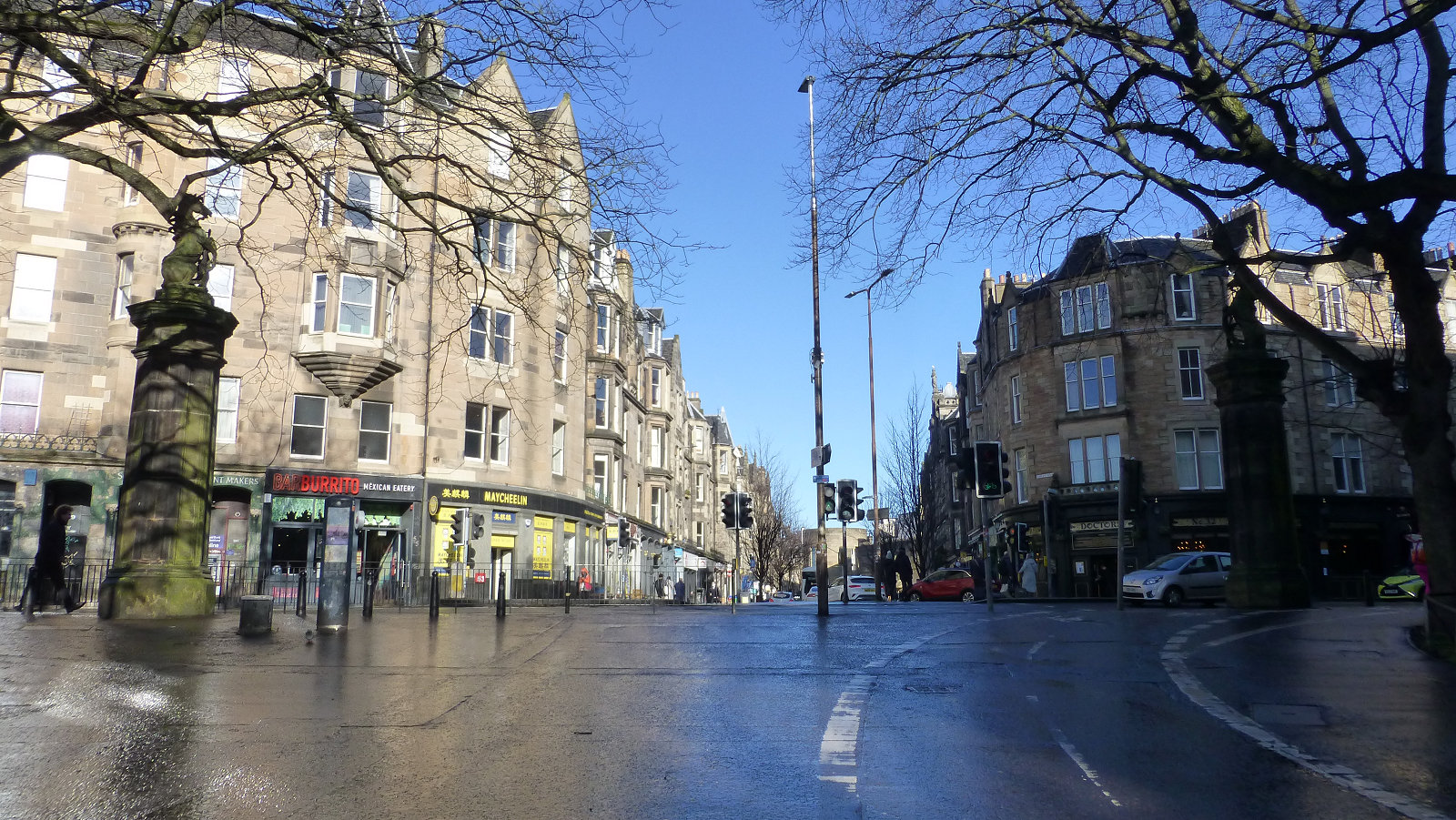 My plan today was to take some of the uniques I still had around the city centre. I just don’t like to leave the odd un-taken zone here and there, looks untidy on the map. My first unique was NelsonHall, an easy walk from the Alpkit shop and with the added bonus that the rain was to my back. Actually, it wasn’t rain, more sleet than rain. Unfortunately, my next four uniques where towards the west, and back into the driving rain/sleet again. Three zones, Baguazone, MeadowWalk and GeorgeSquare, where on the way and provided a few points to the round total.

Next unique was SoderbergZone, located in Quartermile, once the site of the Edinburgh Royal Infirmary and now trendy flats, trendy coffee shops, gyms with trendy looking people and over-priced million-pound plus penthouse style apartments. Actually, it doesn’t look all that bad and best of all the rain stopped and the sun came out to play. Still bloody cold mind you. My next unique was close-by, zone Lauriston, just off Lauriston Place. This was followed by unique zone MiddleMeadow, completing the small bunch of uniques I wanted in this area of town. 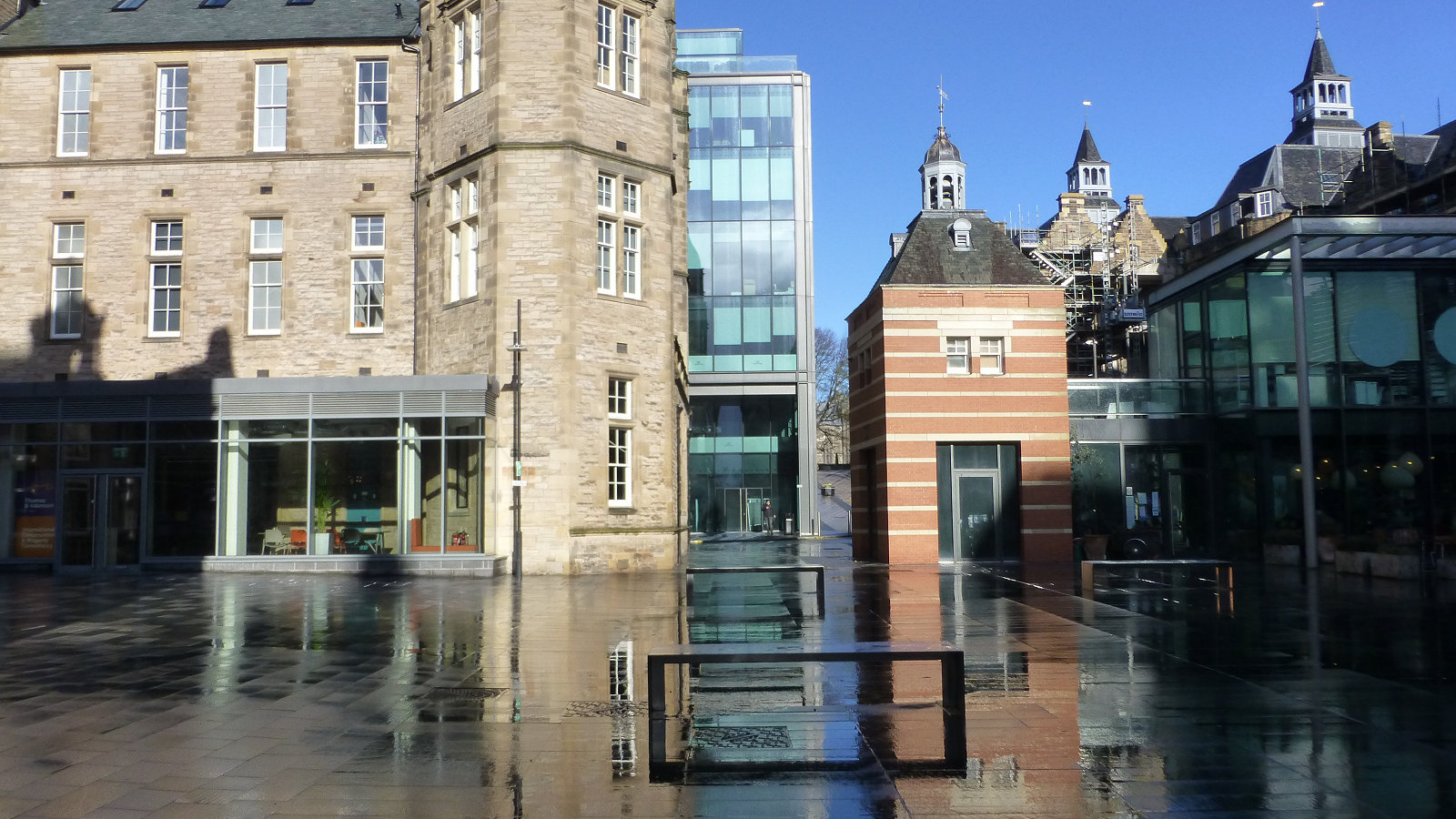 My next unique was one I failed to get on a trip to Edinburgh during the Christmas break, zone CampHolyrood, located on property belonging to University of Edinburgh. The gates were locked at the time hence not getting the zone. Along the way I picked off zones McEwanHall, OldCollege and HunterSquare. I tried to take JohnKnoxZone on the Royal Mile but my turfman icon was jumping about all over the place, everywhere except in the zone itself. I tried disconnecting/re-connecting the GPS, relaunching the turf app and even restarting the phone, all to no avail. Did manage to get the turfman into the zone a few times but only for short tantalising moments and not long enough to take the zone. After a few segments of the green take bar it would jump 10 meters out of the zone. Very frustrating. I gave up eventually as I was at risk of getting run over by a bus or arrested for loitering and acting suspiciously.

Zone CampHolyrood was successfully taken this time and a south-facing bench proved a fine setting for lunch, a Meal-Deal from Sainsbury’s consisting of bacon and egg sandwich, a strawberry Innocent Smoothie and a fruit and biscuit Yorkie. The sun was shining, even warm, and it was sheltered from the biting wind. In fact, I even had to open my coat at one point all be it only briefly. When the sun dipped behind a cloud it was back to bloody cold instantly. 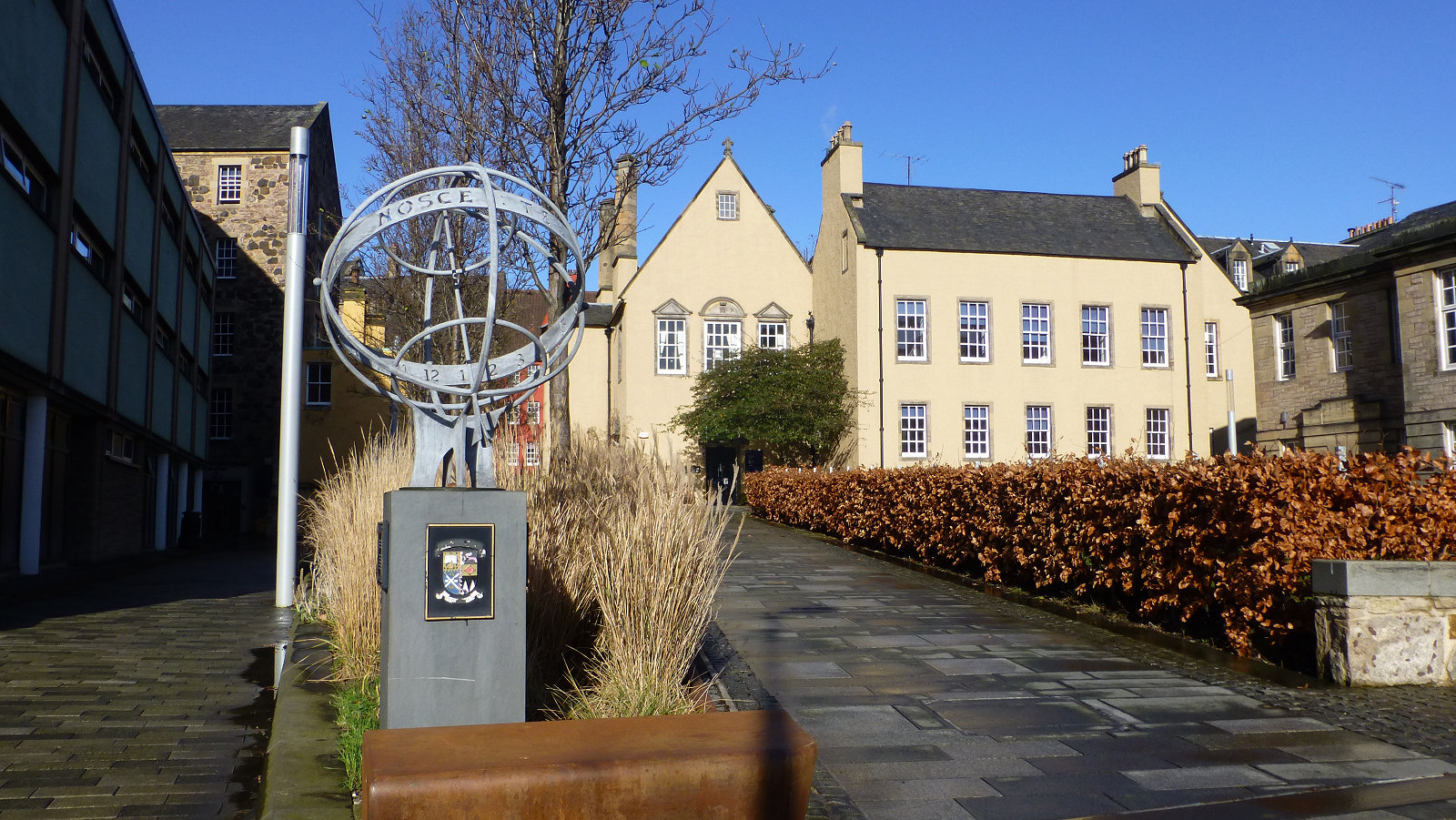 The next batch of uniques were located around the eastern side of Calton Hill. But first a walk down the remainder of The Royal Mile offered up zones SibbaldWalk, ThePoet, VeteranZone and RoyalMilezone, the latter outside the either love it or hate it architecture of the Scottish Parliament buildings. As an ex-Quantity Surveyor, I look at all the curves and see why it cost £414 million, ten times the original estimates. To be honest, I wasn’t surprised as that was my experience of most government run contracts where politicians or councillors are involved.

There was one zone, still a unique to me, and still sitting at neutral today, that I want to take, zone HolyroodAbbey, just across the road from the Scottish Parliament. However, I’m loath to pay £17.50 for the privilege. And out of interest that’s 222 Swedish Krona. I’m going to suggest this zone be relocated to allow it to be taken without having to fork out the equivalent of 17.5 four-packs of Chunky Kit-Kats. I’d rather spend the money on becoming a Turf Supporter. Oh, I already am a Turf Supporter! Taking the zone in Edinburgh Castle is likewise with £15.50 a ticket. 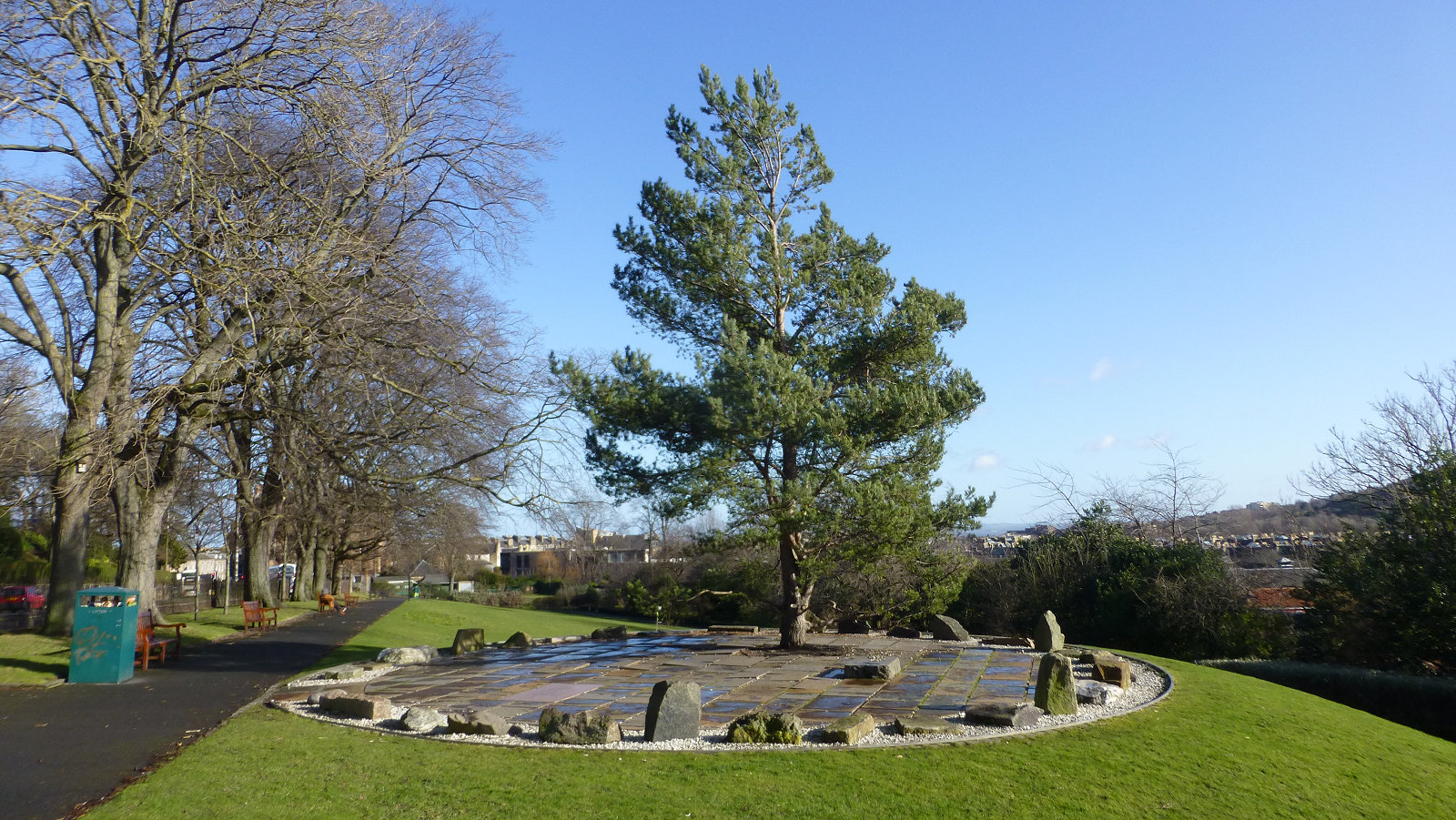 RegentPark zone was next to be taken, another unique. The zone is located in Regents Park at a sculpture called The Stones of Scotland, a circle of stones from each of the 32 Councils in Scotland. There’s an interesting free leaflet available from the Edinburgh Geological Society about this sculpture along with loads of others that might be of interest to both local and visiting turfers alike. Shame the zone isn’t called StonesOfScotland!

My turf-walk now took me along London Road, heading back towards the city centre, picking off another five uniques, including TheLondoneer, Elginzone, LondonShadow, RoyalGarden and finally PoliceField. This last zone is located outside Gayfield Police Station the former headquarters of Lothian and Borders Police (until 1st April 2013 when it became Police Scotland – I wonder who chose that date?) and also a setting mentioned in one of Ian Rankin’s Rebus crime novels, “Even Dogs in the Wild”. This has me thinking, are there any others zones associated with settings from the Rebus novels? Ian Rankin’s site has a page showing points of interest relating to the books. I can see some interesting turfing in the pipeline. 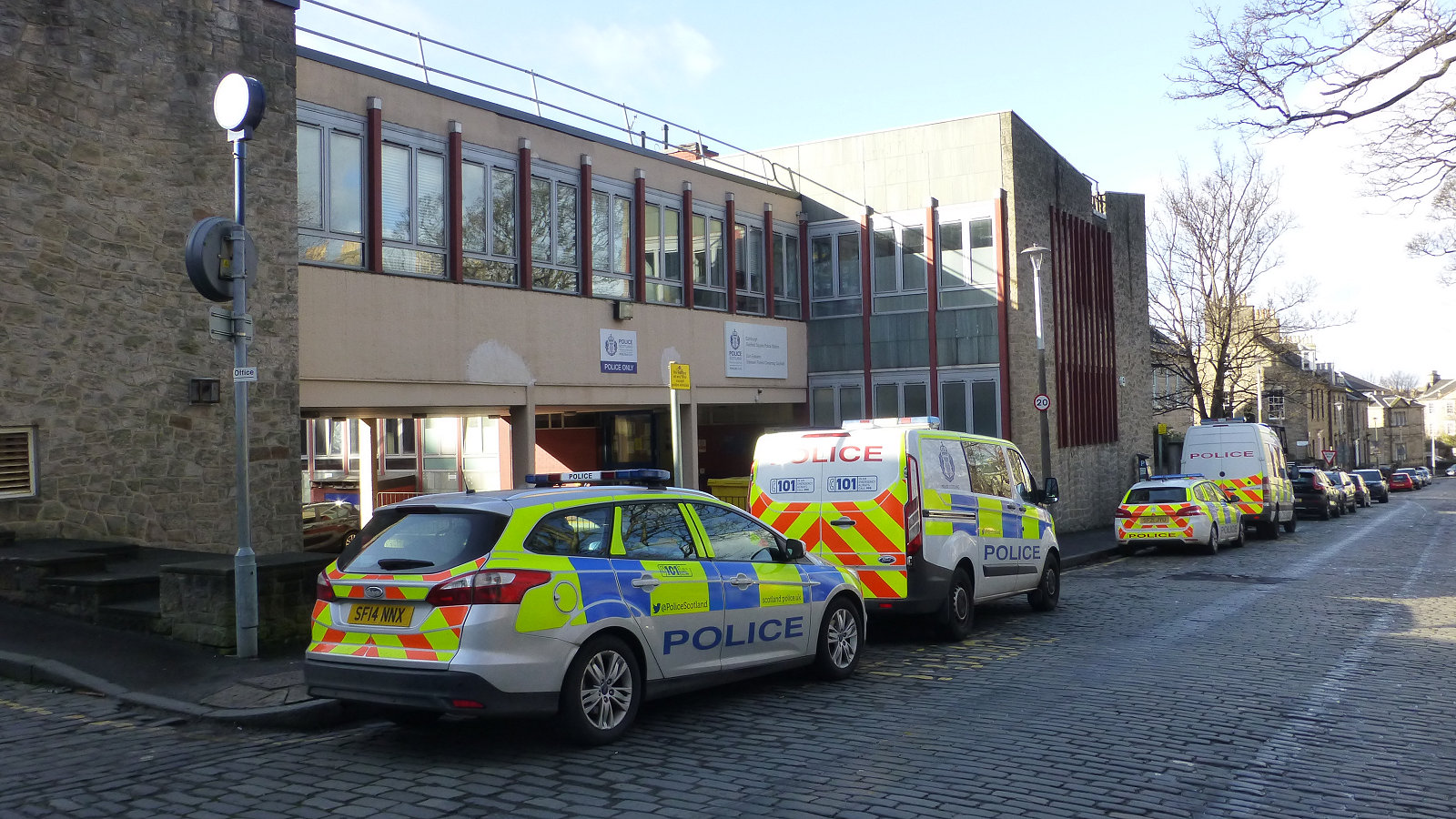 On the way back to the bus stop, I picked off three more zones, StMarys, PrincesZone and Waverley. I had intended to pop into M&S, located right next to the bus stop for the No 31 to Bonnyrigg, as I need to purchase some small items of clothing of a personal type and while turfer ChoccyMuffin (a.k.a. Cathryn, my wife) had offered to do that for me, a man just needs to do some things for himself. It’s a matter of pride you understand. In any case, the bus was due in 3 minutes and I really wasn’t in the mood for shopping for men’s underwear. Oops, there I’ve gone and said the word. Is that too much information? Bye for now.