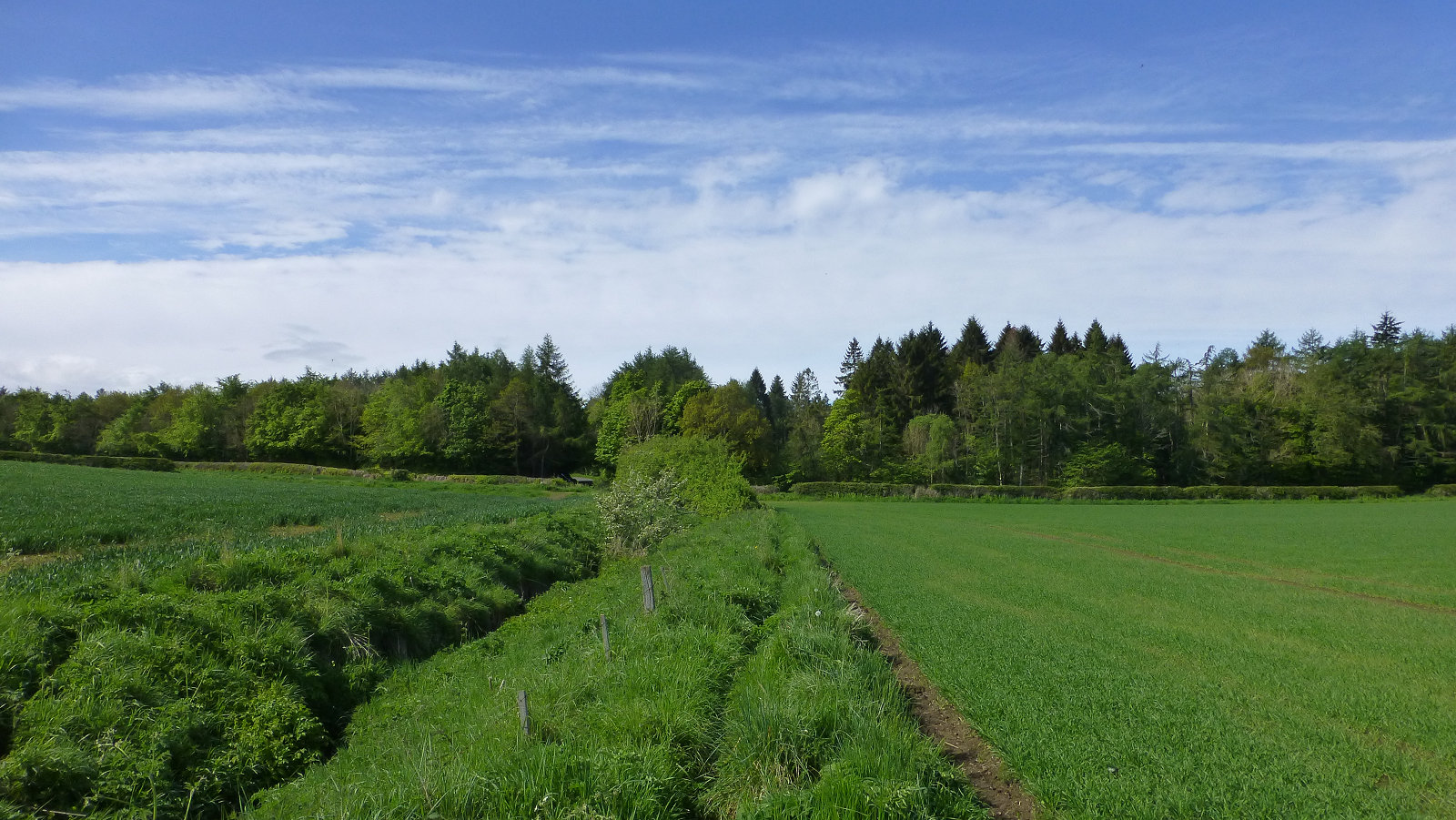 Yesterday I’d half decided to tackle Prestonpans, Port Seton and Longniddry, for those final 72 round unique zones I needed to clinch the Diversier medal. However, this morning the thought of another long day in the saddle wasn’t very enticing so decided I’d start the day with some much needed maintenance on the Surly Ogre and then later grab the 13 zones around Gore Glen and Dalhousie Castle that are still at neutral status since the start of the round. Having them sitting there, un-taken, and with 50 bonus points each, just didn’t seem right. But first, I needed to be, wait for it, Bicycle Repairman!

My first task was to fix that bloody annoying click-click when I’m pedalling the Surly ogre. The replacement chairing bolts had arrived – £6.00 for a pack of five, so nothing that will break the bank. I started by removing the chain, pedals, both cranks and also the bottom bracket, giving everything a thorough clean to remove all the mucky oil and assorted crap that bikes tend to accumulate. The new chain ring bolts fitted just fine and tightened up good and firm surprisingly easily. I decided to forgo using thread-lock as I’d never needed it in the past and could always use it again later if required. The bottom bracket is the part that holds the bearings for the pedals and I wanted to check it was still okay. 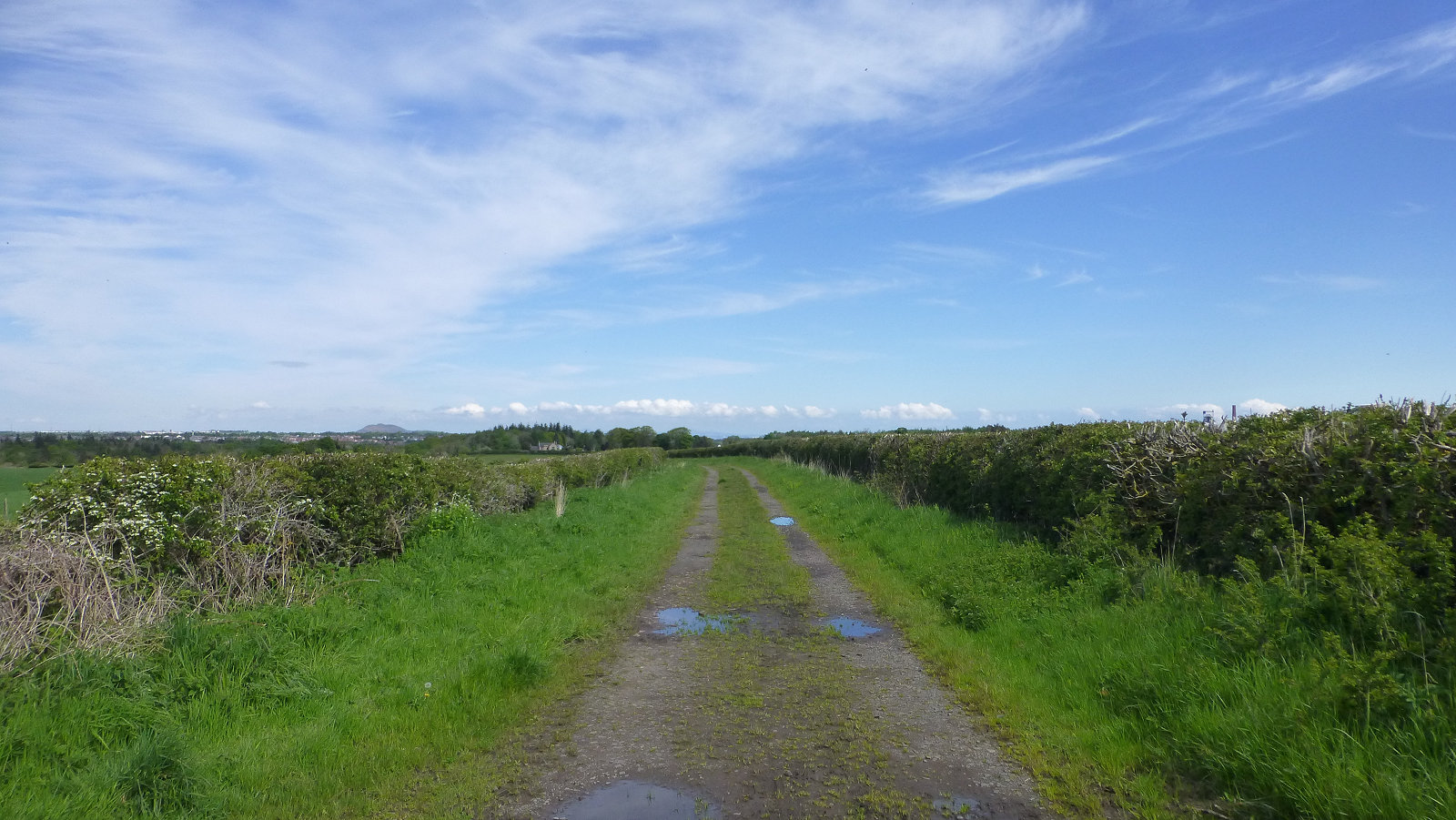 I’d also noticed that the chain line was out by a couple of millimetres. Close inspection showed I’d put the 2 mm spacer on the wrong side. It should be on the drive side, not the non-drive side. Easily remedied. Once everything was re-assembled and all bolts double checked, it was fingers crossed and out for a quick road test. Oh, the silence. Not a single click, squeak or ping when I pedalled. And oddly, while I’d done nothing to the rear hub gear, the strange rough-sounding noises from the other day were gone. Very odd but I’m happy with that.

With the Surly Ogre feeling almost as good a new, it was time for some turfing. The first zone I wanted to take was ArnistonBing, out at Gorebridge. I cycled along the B704 as far as Lothian Cat Home, then headed south along the Povert Road, once tarmac but now being reclaimed by Mother Nature. And, of course, Mother Nature, in her wisdom, included stinging nettles, thistles, triffids and brambles, just what a cyclist wearing shorts wants. Not! 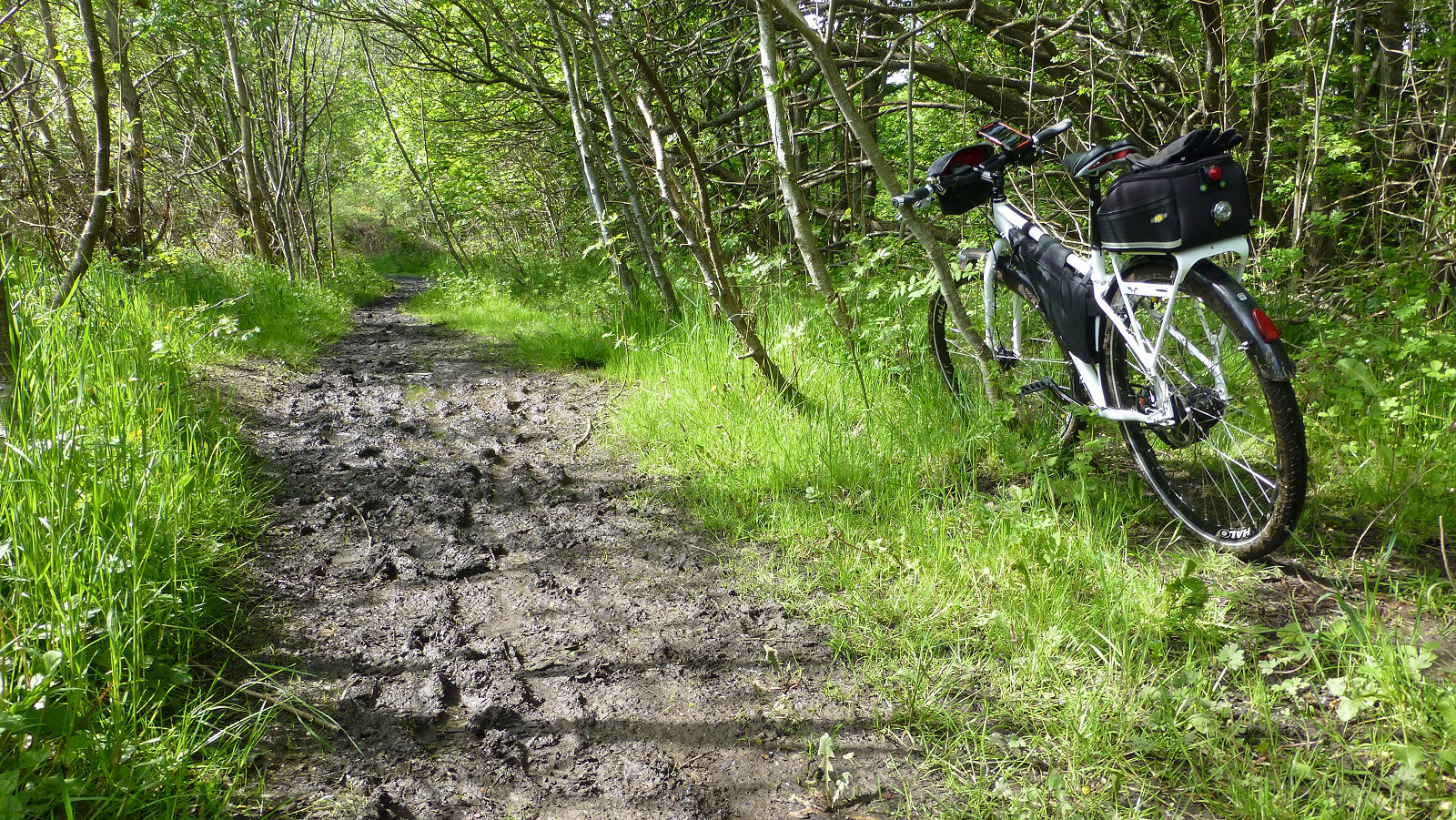 The route along here, like many of the others I would ride along this morning, requires the rider to be a skilled member of the Department of Silly Bicycle Antics, a sub-section of the Ministry of Funny Walks. You know the type of thing I refer to? Lifting your feet up to the handlebars to avoid stinging nettles, lifting one leg to avoid ripping your shins on brambles and dropping you chin onto the handlebars to duck under low-hanging branches. Luckily, there was no-one about to see my attempts at all of the above.

Zone PovertRoad was taken along this route, then it was up to ArnistonBing. You can cycle most of the way up the bing if the fancy takes you, but the final few meters is impossible to cycle, even with the lowest granny gear available, though I’m happy to be corrected. Video evidence required, please. No, the last few meters are head high with bracken, though you can take the zone a few meters from the summit. 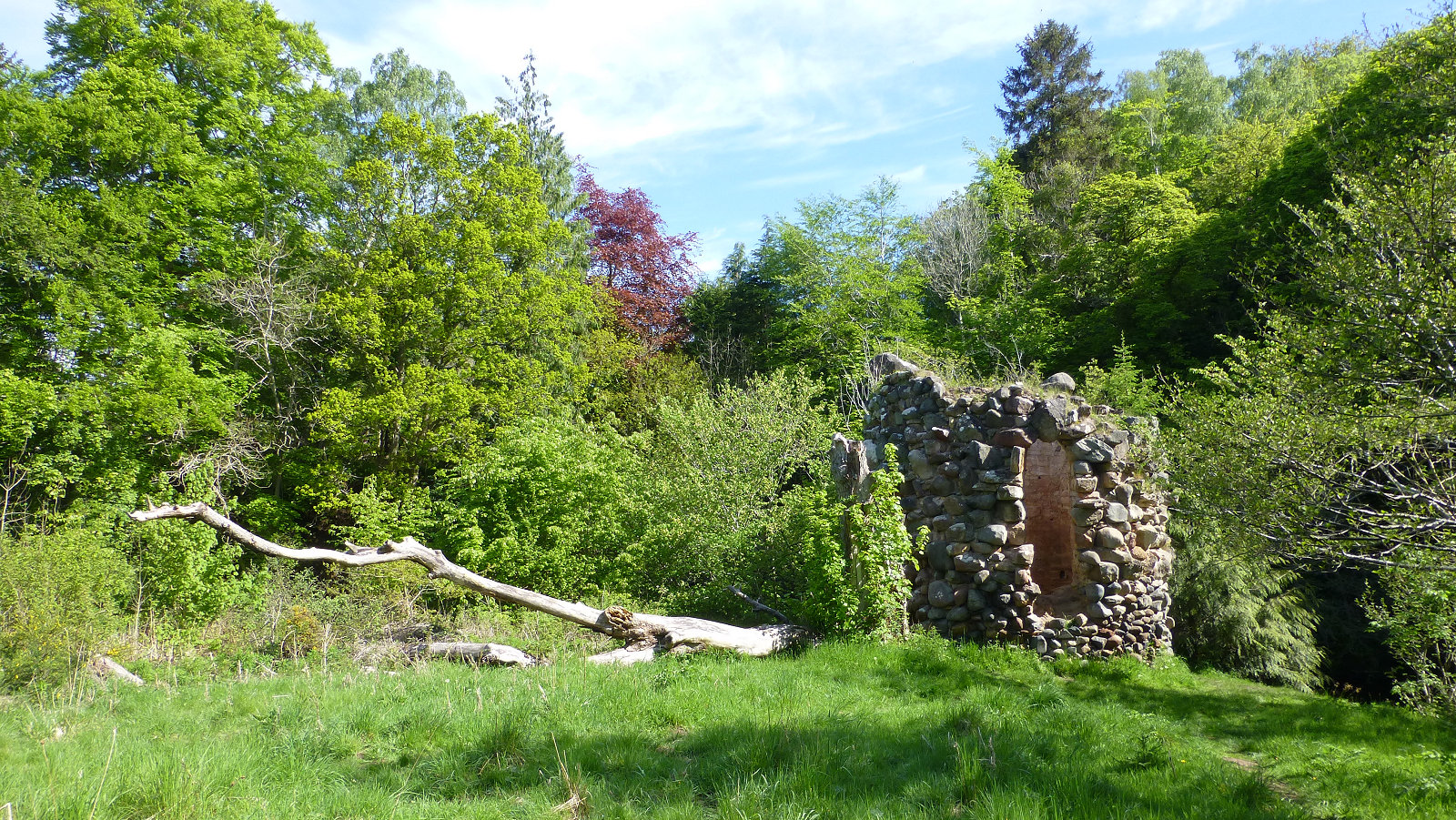 I now dropped down to Gore Glen for zones GoreGlenPark and GoreWater. Managed to take both without issue this morning, though both zones show signs of turfer trails leading off the route, where turfers have been struggling to get a GPS signal. Next, back along the Povert Road and along another grass road to Prestonholm, and the zone of the same name. The path here will soon be unusable. The vegetation, including the usual stinging nettles, thistles, triffids and brambles, is taking over rapidly and another year of limited use will see it a no-go area. I am tempted to request the zone be move away from the river and onto the main access track. Cycling the path from zone PovertRoad down to zone Prestonholm, saw some classic examples of Silly Bicycle Antics.

Dalhousie Castle was next, with 8 zones also just sitting there, un-taken, and with 50 bonus points each. The trails here were better than expected. I thought the overnight rain would have left the place a muddy quagmire but, while damp, wasn’t too bad. Even the two zones besides fields, UpperDalPath and DalhousiePath, could be reached easily by bicycle. The trams lines through the drops were firm and mostly dry, although corrugations from the tractor tyre treads made for a shoogly, teeth-chattering, ride in places. Kind of wished I’d taken the Krampug or the Pugsley. You barely notice the rough surface with the bigger, softer tyres. 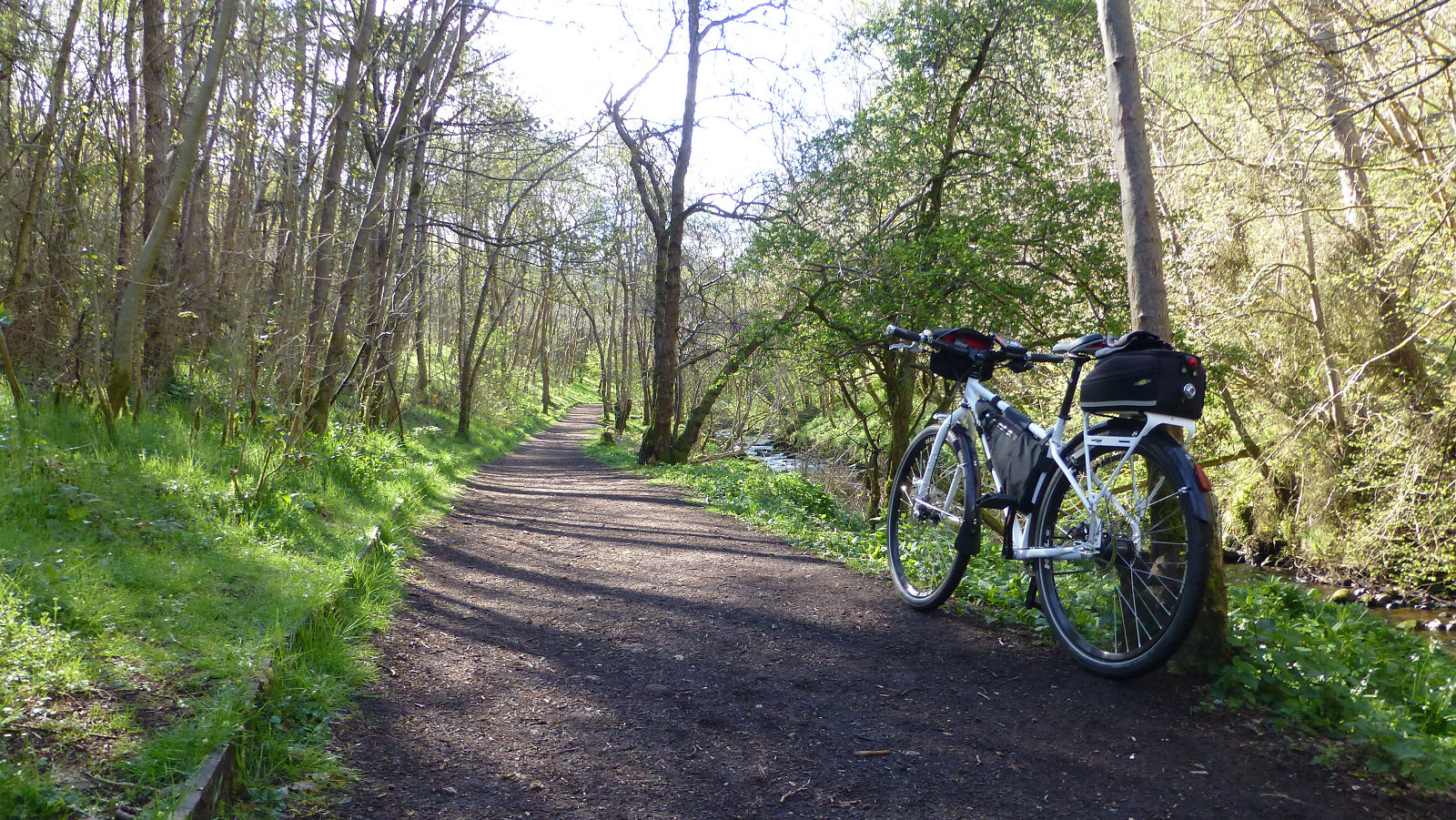 Another 13 round uniques added to my 428 total from yesterday, gave me 441 and I now only required another 59 for the Diversier medal. Locally, I’ve just about exhausted all the available zones, though there’s still another dozen lurking along the River North Esk at Roslin Glen and Polton. So tempting to take the Swifty Air kick scooter out for a nocturnal turfing session. We shall see. Bye for now.