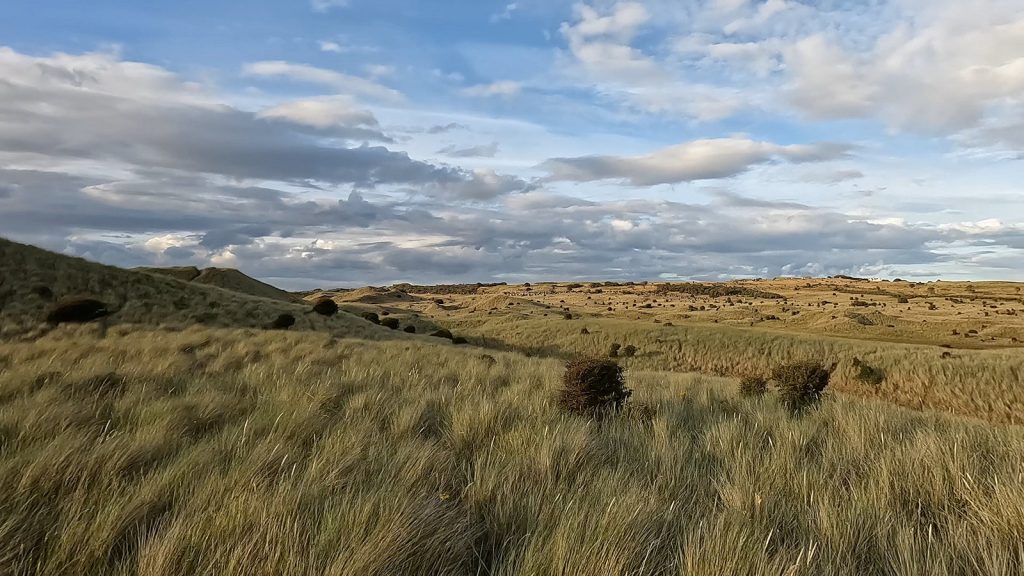 I don’t like too much sun, or excessive heat for that matter, and turfing during the current so-called heat wave, which seems to have sent the media into a Nanny State of warnings, cautions and even news specials, just isn’t to my liking. Yes, I know I’m strange. So, what better excuse to avoid that nasty hot sunshine than to turn turf vampire and head out at night. And where do you think that will be? Yes, of course, Aberlady Bay Naturist Reserve.

It was just approaching fully dark around 11.00 pm when I parked in Gullane, beside the Old Smiddy, and unloaded Pugsley from my new ever-so-pleasing Pendle fat-bike-compatible bicycle rack, in a fetching bright orange colour. By the way, I’ve sorted out that most annoying of beeps when reversing (the sensors were detecting the rack mount even without the rack and bike). I discovered a button on the console that switches off the reserving aids. Guess I should really RTFM sometime!

Setting off on Pugsley, I followed the cycle/foot path running alongside the A198, heading back towards Aberlady. Then just before quarry corner, I crossed over the road and onto the golf course. Which golf course I was actually on was uncertain as there are 4 different courses here, one is Luffness New Golf Club and the other three are Gullane Golf Club. Not that it matters really. I crossed holes named Hill and March, then Hole 7 and Hole 10, then along Hole 14, and finally down Hole 13 and across to Hole 12. And if you can follow that, you get a Planet Gary badge, like a Blue Peter badge but virtual. And for my efforts, this brought me out on the path that takes you to the dunes. Just where I wanted to be.

Running the Pugsley’s tyres at 8 psi front and 10 psi rear made short work of the path, even the stretches of deep loose dry soft sand, though the legs do need to work that little bit harder. Okay, a lot harder. The main hazards along this path are the sabre-toothed rabbits (mutant escapes from a nearby military R&D facility in Gullane, or so it is said by the locals), a veritable Watership Portadown of rabbits. They were all over the place, running away, running back again, doing what rabbits do most of the time (if you know what I mean), thumping back-leg warnings to other rabbits and playing rabbit chicken with Pugsley. Other hazards were stinging nettles, jaggy Scots thistles, spiky sea buckthorn plants and trying not to fall off Pugsley when swerving to avoid suicidal toads or frogs, not sure which, sitting in the trail. Oh, the fun of fat biking at night.

First zone of the evening was PillBoxWW2, reached through the tussock grass on the landward side of the dunes. Easy enough to reach once you’ve been there a few times. A useful guide is to follow the timber posts and the zone is between, a slightly out from, the two larger bushes. It’s a tricky cycle but can be done. Easier to walk though. Remember to carry a torch so you can have a nosy inside. After that it was back along the same path, if you can call it that, and out for zone SandySocks. I followed a slightly different route this time, paralleling the sand spit until opposite the zone then veering 90 degrees right and straight for the zone.

Out on the open beach I switched off my lights as it was easily light enough to see and I never like attracting unwanted attention, as you might appreciate from my attire, or rather the lack thereof. (Yes, you have surmised correctly, for I am in naturist turfer mode again and have been since crossing the road onto the golf course. Well, it is as dark as a black cat in a coal bunker, as hot as hot can be and there’s not a soul for miles, probably). Different along the dunes trails which are near impossible without lights in the darkness. The sound of a marine diesel engine could be head across the Firth of Forth, as well as seabirds such as arctic tern and curlew calling along the shore. I wonder if they ever go to sleep?

I could just see in the darkness, the dark brooding bulk of the concrete mooring block which is located between the two submarine wrecks, so pedalled away in that direction, splashing my way across water channels. The going was quite firm and I soon reached the first of the two subs and quickly took the zone, followed a few minutes later by the second sub wreck zone. These midget subs were XT-type, training craft used for very brave sailors to hone their skills for their attack on the German battleship Tirpitz. They succeeded in causing considerable damage to the pride of the German fleet.

My next zone was TheOldMan located at Gullane Point. So, a nice easy cycle along the beach, stopping a couple of times to paddle in the sea, which was very refreshing in the unseasonably hot weather we are having. I wasn’t tempted to skinny dip, I might add. After taking the zone I followed the dirt track up to the golf course and eventually made my way to Gullane Hill, taking zone GullaneHill, before descending down to Gullane and the car. There was a grasshopper warbler singing in the long grass. It could be mistaken for a cricket or grasshopper but is much louder. And that was that, only a few zones taken but that wasn’t the point of the exercise, that was to simply enjoy a night-ride on the fat-bike at an amazing location, Aberlady Bay Naturist Reserve. Back soon.