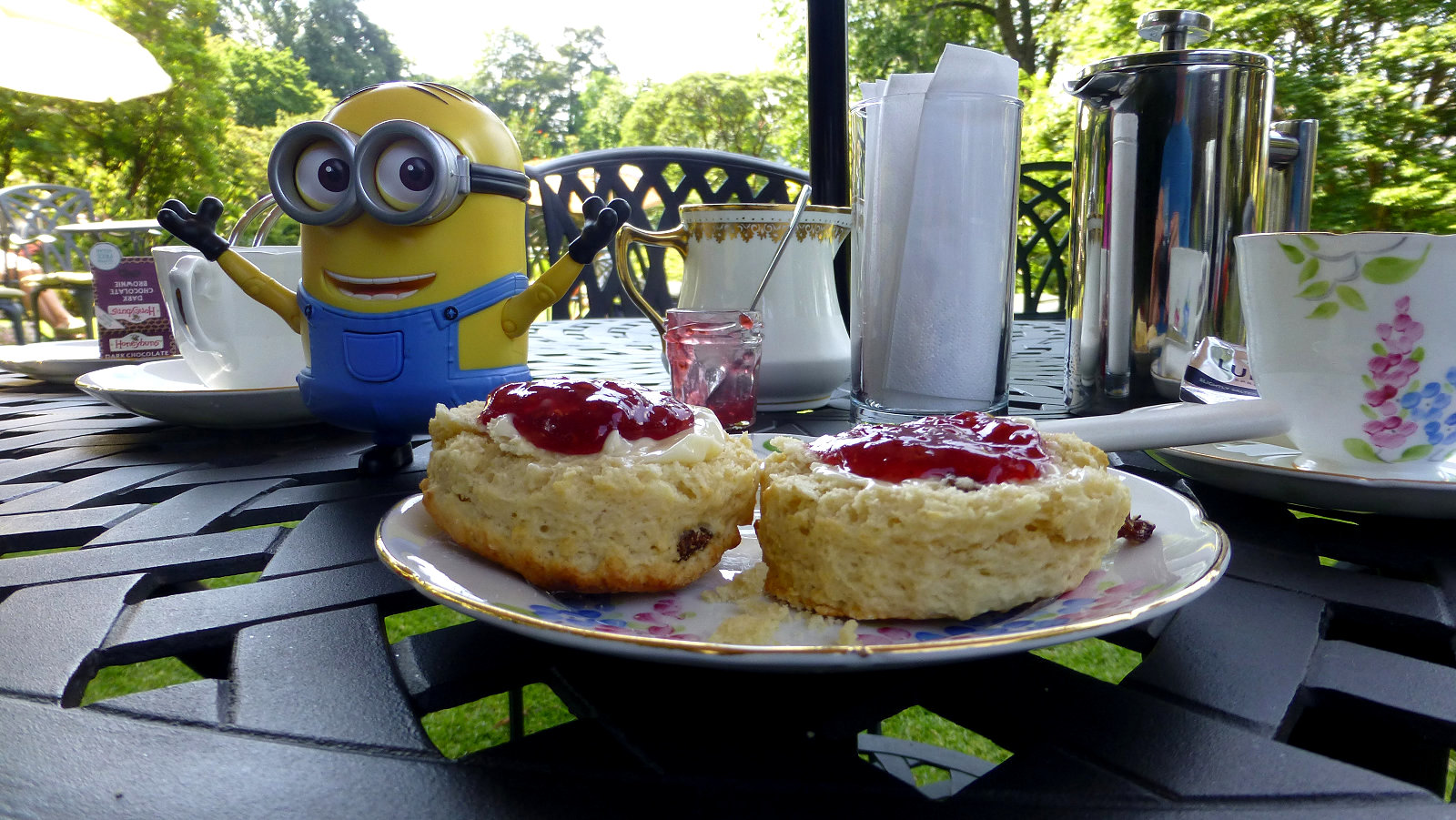 There must be something wrong with Gorebridge, half the zones are still sitting at neutral despite only five days remaining until the round reset. Not sure what might be wrong here but perhaps best avoided? So, I’ll stick with my home turf of Bonnyrigg. However, while a leisurely cycle around the Bonnyrigg on a pleasantly warm sunny March morning is well recommended, finding something to actually blog about can be quite a challenge. What can you say about zones where you’ve lost count how many times you’ve taken them? So, rather than go into too much detail about the zones, I’m going to tell you a story.

Now, regular visitors to Planet Gary will have come across mention on various occasions of my ongoing quest for the Scone of Scones, a search for the Ultimate Scone, the scone you might find in The Restaurant at the End of the Universe. Whenever I visit a cafe, restaurant, hotel or humble greasy-spoon caravan at the coast, I always try a scone to see how it fairs. Sadly, and with no small amount of scone munching, I have yet to find the Scone of Scones. And this, the Scone of Scones, is the story I will tell the telling of. The story is set in a time of legend, and of heroes, when turf was something you built your black-house with and the deep fried Mars bar had yet to come into being.

But first, some turfing. My first three zones are close to the house, only a few short minutes on the Surly Ogre. First PeacocksBeard, followed by Pittendriech, and finally, to complete the trio, Brixwold. Yes, what to say about them? Struggling! Ah, if you visit Pittendriech at night you will see magpies roosting in the trees. Might be more difficult once the leaves come out. Need to be quiet though or they will attack turfers.

Now for our wee story. It begins way back in the thick porridge of time, in the magical misty glens of the Highlands of Scotland, when real men wore blue face-paint and were unafraid. When real men were brave of heart and spoke Scottish with a subtle hint of an Australian accent, which was all rather strange as Down Under hadn’t been discovered yet. It was a time when both the lads and the lassies wore skirts and nae knickers (an ancient Scottish tradition that stays with us to this very day), all the better for frightening the English invaders and a quick shag* behind the cattle sheds. Of course, the Highland lads, even as they carried swords with names like Wolfburn and fearsome axes called Skull-Crusher, didn’t like to be seen wearing skirts, so they called them kilts instead, as they were all slightly embarrassed by it all.

All this talk of Scottish lasses with nae knickers brings us to zone LadyMarion, who probably didn’t wear any knickers either, as she helped Robin and his band of merry outlaws steal from the rich with the honest intention of giving to the poor but were forced by the wicked Sheriff of Nottingham – title now known as Chancellor of the Exchequer – to use it to pay the increased tax on the cost of wood fuel for the camp fire. Nothing ever changes.

Next I fairly flew through a good bunch of easy zones in Hopefield, including PisaForest, AuldChester, BurnbraePoint, Bannockrigg, AuldCoal, CockpenBypass and Skeltiemuir, all falling in quick order. Again not a lot to say. Then it was off to the Polton estate for zones Poltonhall, Flash, SelfStruggle and ArgylePlaza, where the wee daffies were out.

And on with the story. We all know the story of the fabled Stone of Scone, also known as the Stone of Destiny. Now there’s a whole bunch of different legends about the Stone of Scone but essentially it was used for the coronation of Scottish Kings and Queens for thousands of years, even into modern times as recent at the 1950’s with the coronation of Elizabeth II. This is not the true story. The Stone of Scone is an invention from the early days of the Scottish tourist industry. Look how well they did with the Loch Ness monster. And they are still at it today, with films like Trainspotting, Local Hero and Restless Natives. Enough said.

The real story relates to the Scone of Scones, not a stone at all, more a traditional fruit scone or bannock, also known as the Scone of Kings (or Queens depending on who had who murdered to claim the Scotttish Crown). Think about it. All those Scottish kings and queens wore skirts or kilts and nae knickers. What self-respecting king or queen is going to sit for hours on a freezing cold dirty block of old sandstone for the duration of a long boring coronation. Not one, I can tell you. It was patient years of research that came up with the real story. More on that later.

A pair of zones at Lasswade High School, FreeKick and CatSchool, were next, and easy downhill from the higher end of Polton. Then it was back across to the cycle way for ChestersGlare, ManyFeet, RobinAndTuck, SignsOfHumans and WaverleyPath, before heading to the town centre for zone Bonnyrigg. And what can I say about these zones? A big fat nothing. Except for zone Bonnyrigg where I passed the charity shop and noticed some familiar clothing still hanging on a clothes rack. It felt a bit strange to see my late father’s shirts still available for sale, I recognised the check pattern. Oh well, hopefully someone will get some good use out of them. Only one owner after all, low mileage.

Back to our wee story. Yes, research. I spent years at the National Library of Scotland, reading through old manuscripts, mostly in Latin but a few in the Gaelic, and picked up a few meagre clues here and there but little of substance. In fact, I was almost about to give up when a chance encounter with a strange elderly lady led me in the direction of William McGonagall, famed as a very bad poet and often cited as “the worst poet in the history of the Scottish language”. Eventually, I found what I was looking for, the recipe for the Scone of Kings. And I quote.

“The Scone of Scones, as the Scone of Kings, shall be a scone or bannock, made with equal parts, finest Scott’s oat flour from the fields of the Kingdom of Fife and fresh ground wheat flour from the Carse of Stirling, a pinch of sea salt from Prestonpans and wild raspberries from the hill farms by Lochdubh. The mixture shall be heated on a griddle of iron cast by the Dwarfs of Isengard until golden brown in colour, the fire kindled by the flame of the Will O’ The Wisp and served on a clean tartan plaid made from the finest wool of the young Kelpie, woven by fire-haired maidens from the Northern Isles. This shall be the Scone of Scones, the Scone of Kings. No king shall be claimed rightful king, nor queen claimed rightful queen, until the Scone of Scones has been consumed in all its entirety. Even the crumbs. Especially the crumbs.”

An unpublished essay by William McGonagall, which appeared to draw from even earlier sources, revealed that it was the Scone of Scone, baked fresh and served hot, with “cream made from the milk of the finest Highland coo-beasties” that was the key moment in the crowning of Scottish kings and queens, not sitting on the Stone of Scone in some dank midge-infested woodland clearing. Aye, you won’t forget a squadron of Scottish midges on the offensive in a hurry. And there you have it, the real story behind the Stone of Scone, or rather the Scone of Scones.

With my sights set on a fruit scone myself, zone GeorgeWarMem was next, then it’s rapid fire zone taking, DobbysSock, Wee, TongueSpatula, LothianSquare, NotFencedIn, WayOfLeary, WaverleyPark and a final, WayOfBaird. Then it was home for one of my mum’s fresh (yesterday) made scones. Not quite the Scone of Scones, more the Scone of Mum. Back again soon. Scoff, scoff, scoff. Yummy!