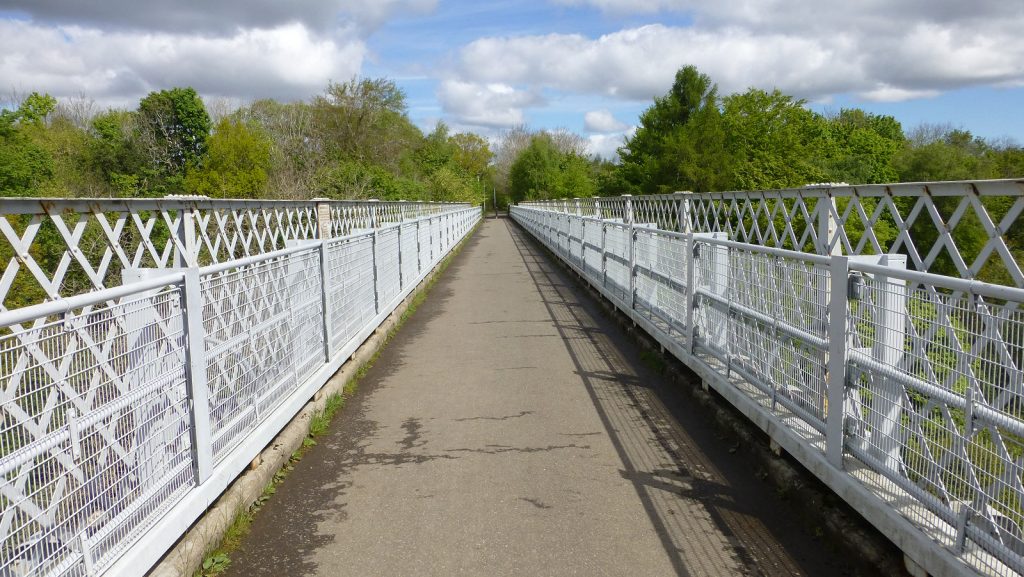 I’m always on the lookout for a reason to head out turfing on mild summer nights. Occurrences and events such as the summer solstice, the longest day, is a few days away on 21st June, so I’ll be trying to plan something interesting then. I missed the full moon on 14th June last week (raining or cloudy, I think) but the next one is on 12th August, so another night to watch out for clear skies and mild weather. August 12th also sees the Perseids meteor shower, though a bright full moon is not ideal for meteor watching. So, what’s significant about 9th June? Other that being National Donald Duck Day, bugger all to be honest. So, I came up with another reason.

Way back on 14th March 2021 I attempted an Eager Ferret on the old railway line path between Roslyn and Loanhead, managing a decent time of 9:01 minutes (would really have preferred under 9:00 minutes) and have always thought about making another attempt. I used the Surly Ogre bicycle on that occasion and decided, just to try something different, to take the Swifty Air kick scooter this time. Thought this might make an interesting comparison. But to be fair, I wasn’t hopeful of bettering that 9:01, no way. I’d be delighted to take the 10 required zones under 10 minutes but that wasn’t likely.

I woke myself up about 11:45 and lay in bed trying to make that final decision to actually get out of my warm, snug, cosy, comfortable bed. It can be so easy to stay in bed and go back to sleep. But I wanted something to blog about the next day, so roused myself, grabbed some water, sprinkled the porcelain and headed out to the shed. It takes about 15 minutes to get ready, all the unlocking and locking things takes time. House, shed, scooter and gate all need dealt with and trying to keep the noise down also adds to the time. Everything seems much louder at night than during the day, when actually it must be exactly the same. Just fewer other noises to mask the sounds. Everything I needed, clothing, lights, water bottle, etc was ready prepared in the shed. Saves time that way.

The turf app showed I was the only idiot up turfing in the whole of the UK. I wonder if this is telling me something? But no matter, I’ve never been one to do “normal” and I’m not about to start now. With such a mild night it was great to don shorts and t-shirt, but carried another layer just in case. No rain was forecast which was bonus. My route started with a long, slow uphill kick scoot along the Dalkeith to Penicuik cycle path. I pretty much had the place to myself. Just passed a solitary gent at zone BonnyriggPath, walking down from Rosewell. I always wonder what they are up to? Where are they going? Where have they been? Are they “dodgy” or just an ordinary person heading home from work or a friend? No doubt they are wondering what I’m up to this time of night, in shorts and t-shirt on a giant kick scooter?

The cycle path is popular with cats out hunting small furry creatures that go squeak, often for the last time. I always speak to the cats but they mostly run away. Guess my cat-talk isn’t up to scratch. Do you know a group of cats is called a chowder? I think a pussy of cats would be better. After Rosewell, the cycle path reverts from tarmac to dirt and the going gets rougher, more loose stones, some cobbles and patches of mud. But the big tyres on the Swifty cope just fine, it’s just a bit teeth-jarringly shoogly until you pass zone RoslinGlen when the surface gets smoother. There was a lone car in the parking area. Could not see any occupants. Seemed odd leaving a car there unattended.

I left the railway path and dropped down to Roslin gunpowder mill, a long flight of hefty steps requiring some porterage of the kick scooter. It weighs in at 8 Kg unloaded, so isn’t really a problem, just slightly awkward to carry. There’s a trick keeping the light where you’re walking. The track from here to Roslin Glen parking area is quite rough, about the same as the early parts of the cycle path earlier. A highlight was an adult badger crossing my path only a few meters ahead of me and a hedgehog later on. A short stretch of downhill tarmac on the B7003 brought me to the path that follows the River North Esk downstream alongside the picnic area.

You could take the road up to Roslyn but would miss the zone near the parking area and the sharp blind bends make not for happy kick scooting at night. On the down side, more porterage across the bridge, up steps to the zone at Roslyn castle and up yet again to Roslyn chapel. But the hard work was all done now, it was more-or-less downhill all the way to Shawfair, a good 5 miles distant. But first the Eager Ferret, known throughout the Nine Realms as the Loanhead Ferret Run.

Starting zone was RoslinCopse. Then it was kick scoot for all I was worth through the other nine zones, ending at zone SkippingZone, about 2.5 Km or just over 1.5 miles away. I hadn’t really done much preparation for this, other than pumping up the tyres. I suppose the main preparation was selecting this time of the day. No horse riders to have to slow down for, no commercial dog walkers with unruly wolf packs, no runners or walkers rendered deaf by their iPad wireless earbuds and no dog walkers with dogs on long invisible dog leads. In other words, the best chance of getting the place to myself.

I had to wait until I got home to see what my time was and I was slightly disappointed with a time of 11:25. So, no Eager Ferret but still an Eager Weasel which is okay. Zone take times for the 10 zones are listed below.

So, I’m going to have to try again. I want to get that time under 10 minutes. But how can I do that on a kick scooter? Firstly, I’ll bring the Swifty Zero next time. It has narrower and faster high-pressure tyres which should make all the difference. I’ll also try and reduce weight and wind resistance. Perhaps leave my pannier hidden somewhere, along with all my clothing. Perhaps even shave off all my body hair like those Tour de France cyclists. Oh dear, perhaps that’s getting a bit too serious?

I now enjoyed a very pleasant and less energetic kick scoot along the remainder of the cycle path to Shawfair, the route was once the Edinburgh Loanhead and Roslin Railway, a branch line of the North British Railway. It closed finally in 1989. With a favourable wind behind me from the south-west, I fairly flew along the path and other than one pedestrian appearing at zone LassieBridge, I had the place to myself. I swithered about heading through Millerhill, then Dalkeith Country Park, but decided instead to head for home via the Kaim, Melville Castle Hotel, Melville and Broomieknowe golf courses and down through Bonnyrigg. Overall, I’d gathered 48 zones over some 20 miles or so of kick scooting, and my Daily-Five in the bag as well. I was home by 3.00 pm. And finally, a new rank Rank 48 – Turf Overlord. Just another 500,000 points to the next one.