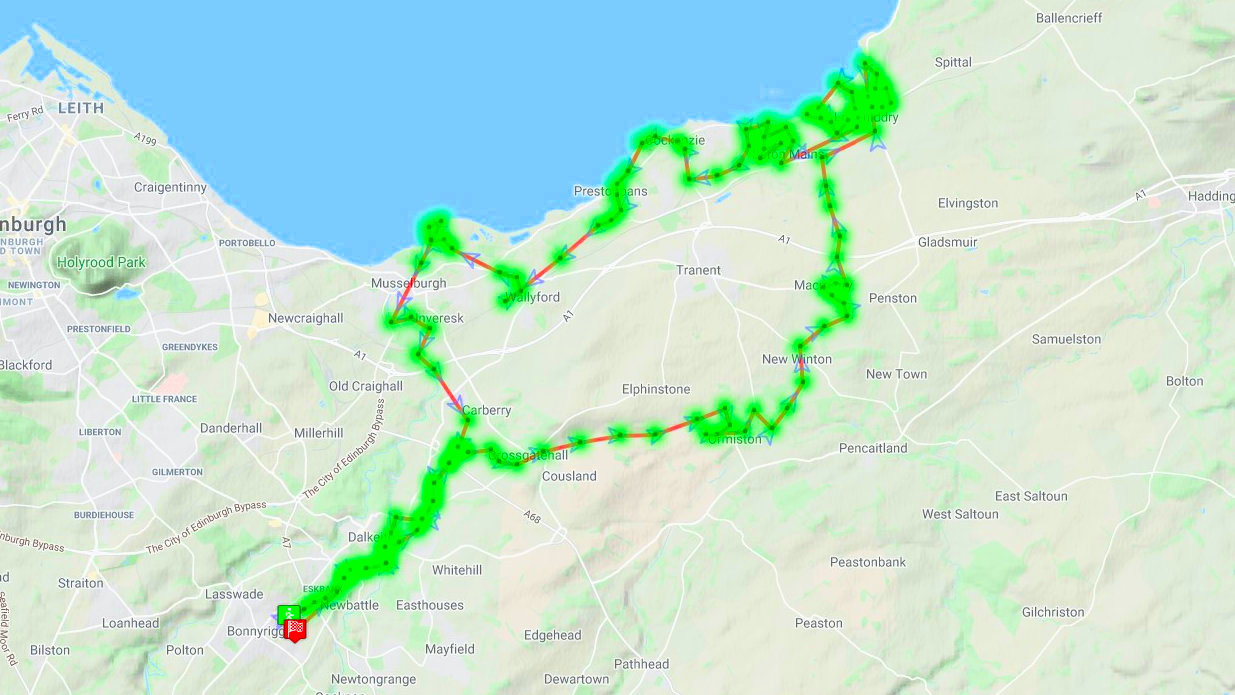 My original plan this morning was to take the Surly Pugsley fat bike down to Aberlady, then ride out and take the zones in the bay and in the dunes. I’d checked the tide tables and low tide was around 11.00 am, so ideal for a Saturday morning trip. I also wanted to make a video of the trip as well. I’d suggested three new zones out in the bay a few months ago and wanted to visit them myself. Two were at the wrecks of the XT-type midget submarines out in the bay – they are only accessible at low tide – and the third at a World War II pill box in the dunes. However, I’d mixed up the days and Cathryn needed the car for golf, so I had to come up with another plan. And that plan was to hunt down some uniques to count towards the 1000 Unique medal. 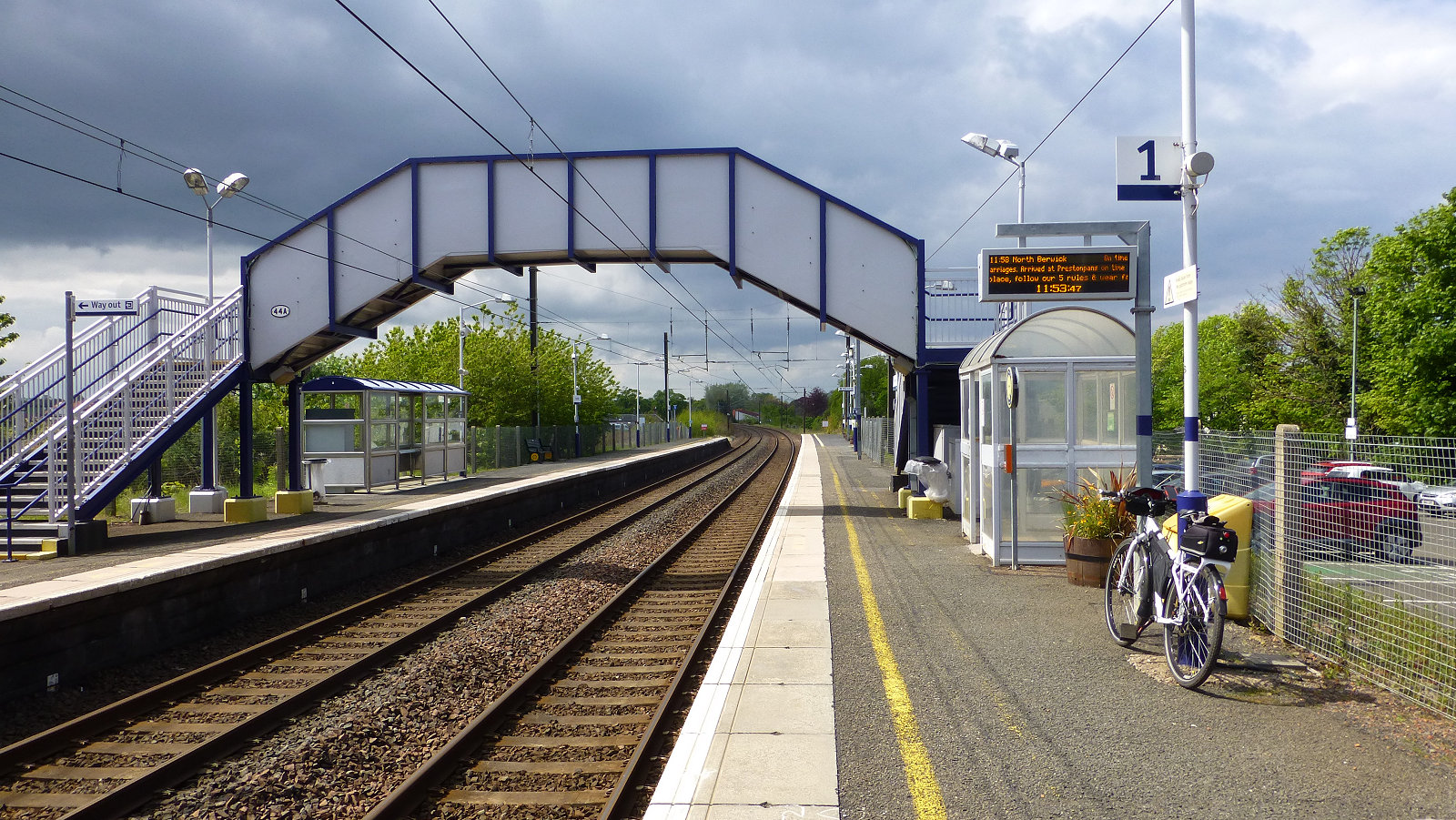 My unique count was sitting at 534, some 466 short of the 1000 required for the next medal, so still a fair bit of turfing to do. But where to go was the question? One option was the Penicuik area which would give me a good number of uniques, about 60 in all. However, I still had some areas to visit along the coast of the Firth of Forth, namely Longniddry and Seton Sands caravan site, and also fancied a day at the seaside. To maximise my unique takes, I decided to first follow the Pencaitland railway path out past Ormiston, then head for Macmerry and onwards to Longniddry. Most of the zones after Ormiston would be uniques, so a good use of travel time getting to Longniddry, if something of a roundabout route. Definitely the long way round.

My route started at home in Bonnyrigg, dropped down through Eskbank and Dalkeith, then up towards Carberry to join the railway path to Pencaitland. Of course, taking any of the zones on the route. The railway path was drier than I was expecting after recent rain and the gentle railway gradients always make for an easy cycle. First detour was across to Ormiston, grabbing a handful of zones before dropping back down to the railway path. Went the wrong way after Ormiston station, going right after Puddle Bridge rather than left but added another unique, HillviewXing, to the collection. 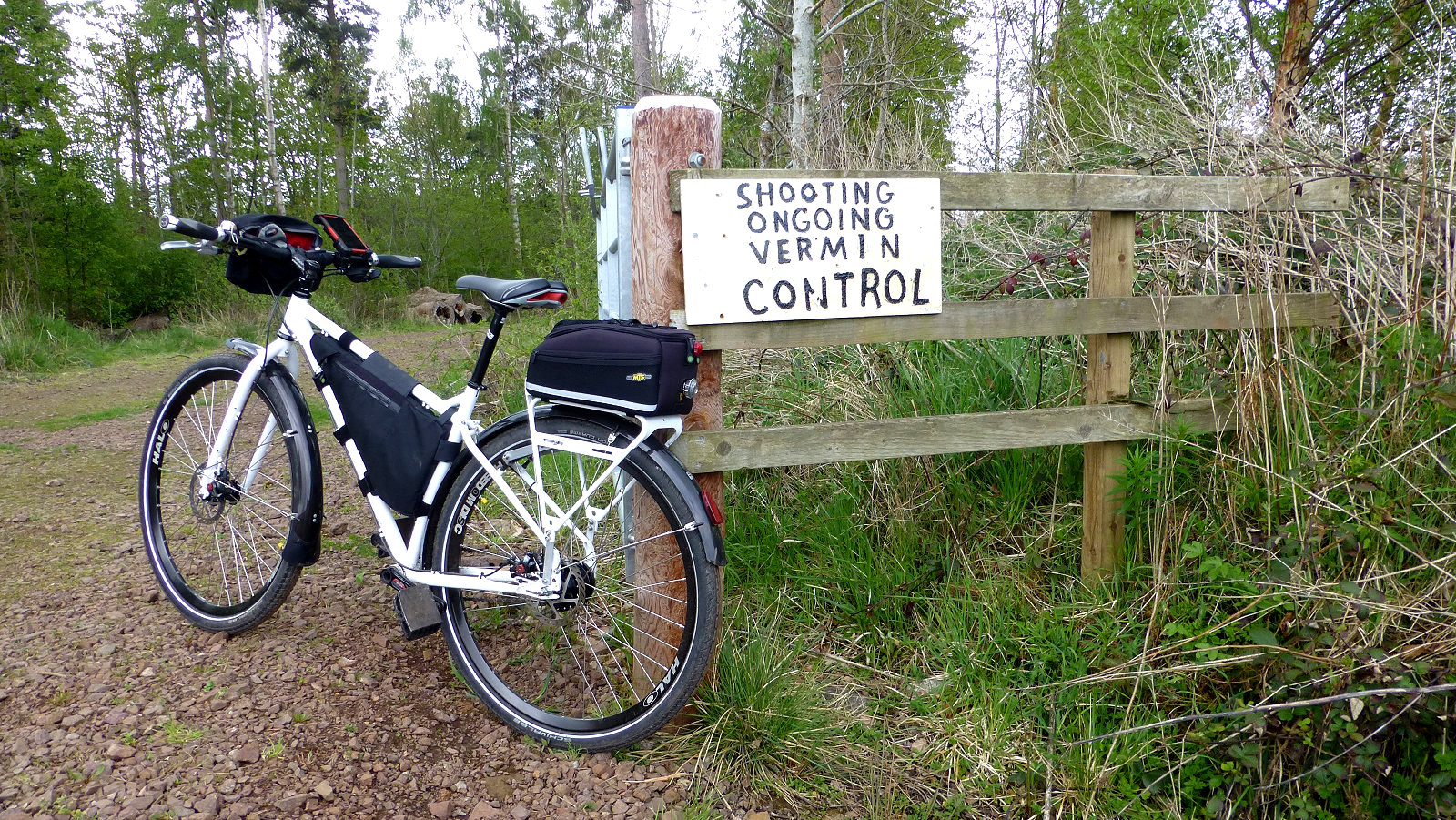 I was now in unexplored territory, as far as turfing goes. Cathryn and I’d walked here previously and some of the tracks up to New Winton and onwards to Macmerry were familiar. One zone I came across was BellyPuddle. The sign on the gate reminded me of a time when I was just knee high to a grasshopper and had asked my uncle who lived on a  country estate, as gamekeeper/head gardiner, what a vermin was. He said it was a kind of killer rabbit that hunted other rabbits but was now extinct. Took me a while to work that one out. I must have been about 8 years old at the time.

Macmerry offered up five easy zones, then it was a series of rough farm tracks, first over the busy A1, then down to the railway line and zone LeafyEnd. I had half expected to be able to cross the railway line here but that was not to be. However, a mile or so along a quiet minor road soon brought me to Longniddry.

With the time approach time for something to eat, I first picked off the zones along the A198 as far as the railway station, then followed the road down to the coast and stopped at zone TheYearlyBath for lunch. Always nice to have a bench to sit on while scoffing the sandwiches. The tide was out and zone NeedsPlanning was accessible but I’d already decided to leave that one for later, to be included on the trip to Aberlady Bay with Pugsley. I hoped to pick off all the coast zones along the shore, including Longniddry Bents, Gosford Bay, Craigielaw and round to Aberlady Bay and Gullane. With the right low tide, you can ride on sand all the way round to the midget subs – if you don’t mind getting wet feet crossing the Peffer Burn where it joins the sea. Far more fun riding the sands at low tide on a fat bike than slogging along with a skinny-tyre bike. Nice to get a message on the turf app from TheInquisitor. No hiding what you’re up to when playing turf! 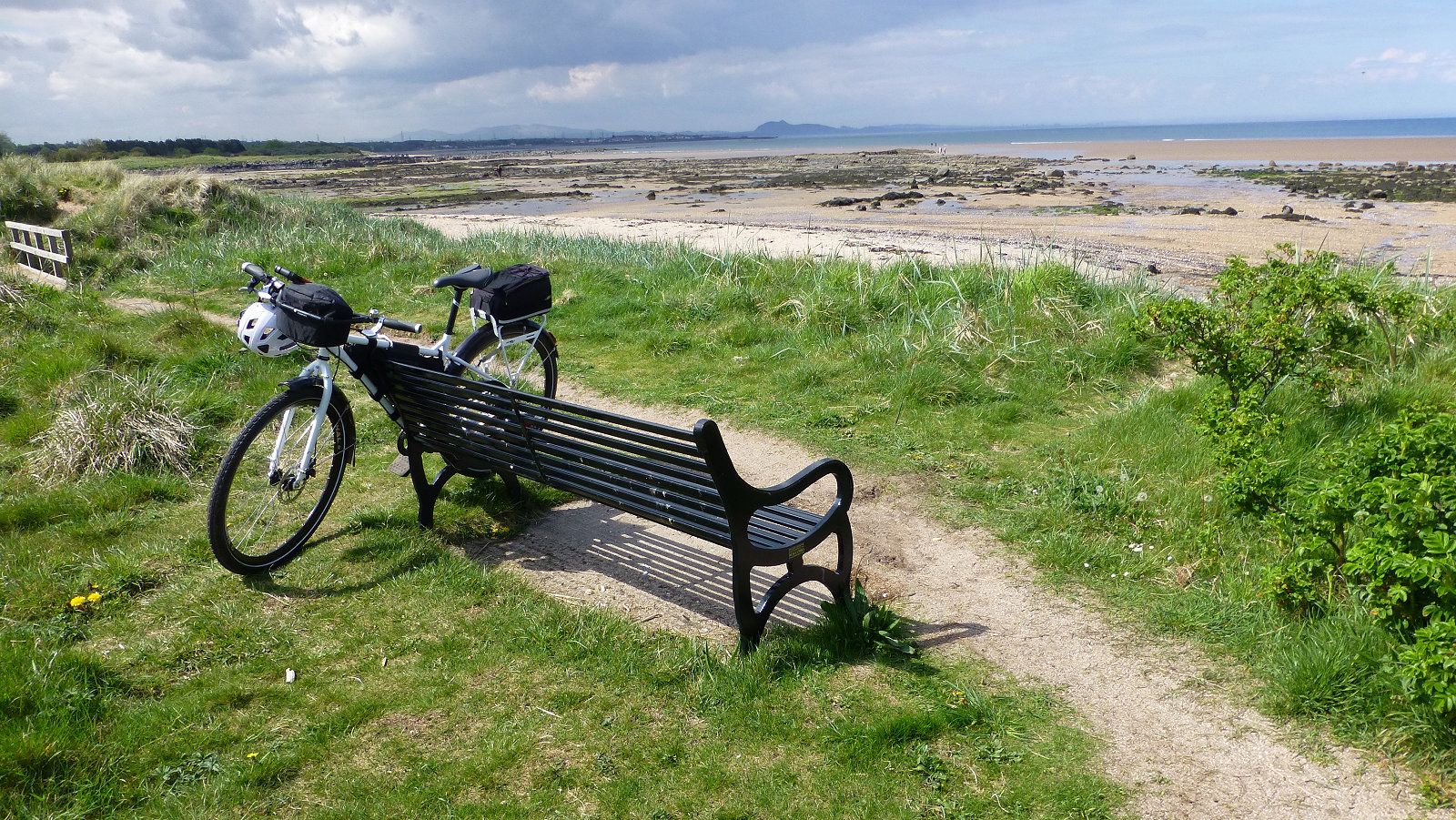 After lunch I started taking the Longniddry zones. Before long I met another turfer riding an electric bike, whose name I’m not going to mention. The why not will be apparent soon enough. We chatted about turfing as you do and I mentioned I was seeking out uniques, not having been to the area before. Then much to my annoyance, once we parted he-who shall-not-be-named proceeded to take, and block, all the zones he knew I was heading for. Zooming about rapidly on his electric bike. I am very tempted to put down a few words here of a less kind nature, but I won’t, because I’m a nice guy and would not stoop so low. Anyway, I let the block time pass by taking a few zones along the shore, then returned back into Longniddry to take the said zones, the blocks now having cleared. I don’t know if the actions of he-who shall-not-be-named were deliberate or not, but if you’re reading this, be a bit more considerate next time.

With Longniddry all but taken, it was onto the next area, Seton Sands caravan site. With only eight unique-to-me zones, it did not take long to bag them. Then it was time to head for home, following the coast road to pick off a handful of unique zones I’d not managed to take on previous visits, either due to missing them entirely, being blocked at the time or new zones created since my last time here. 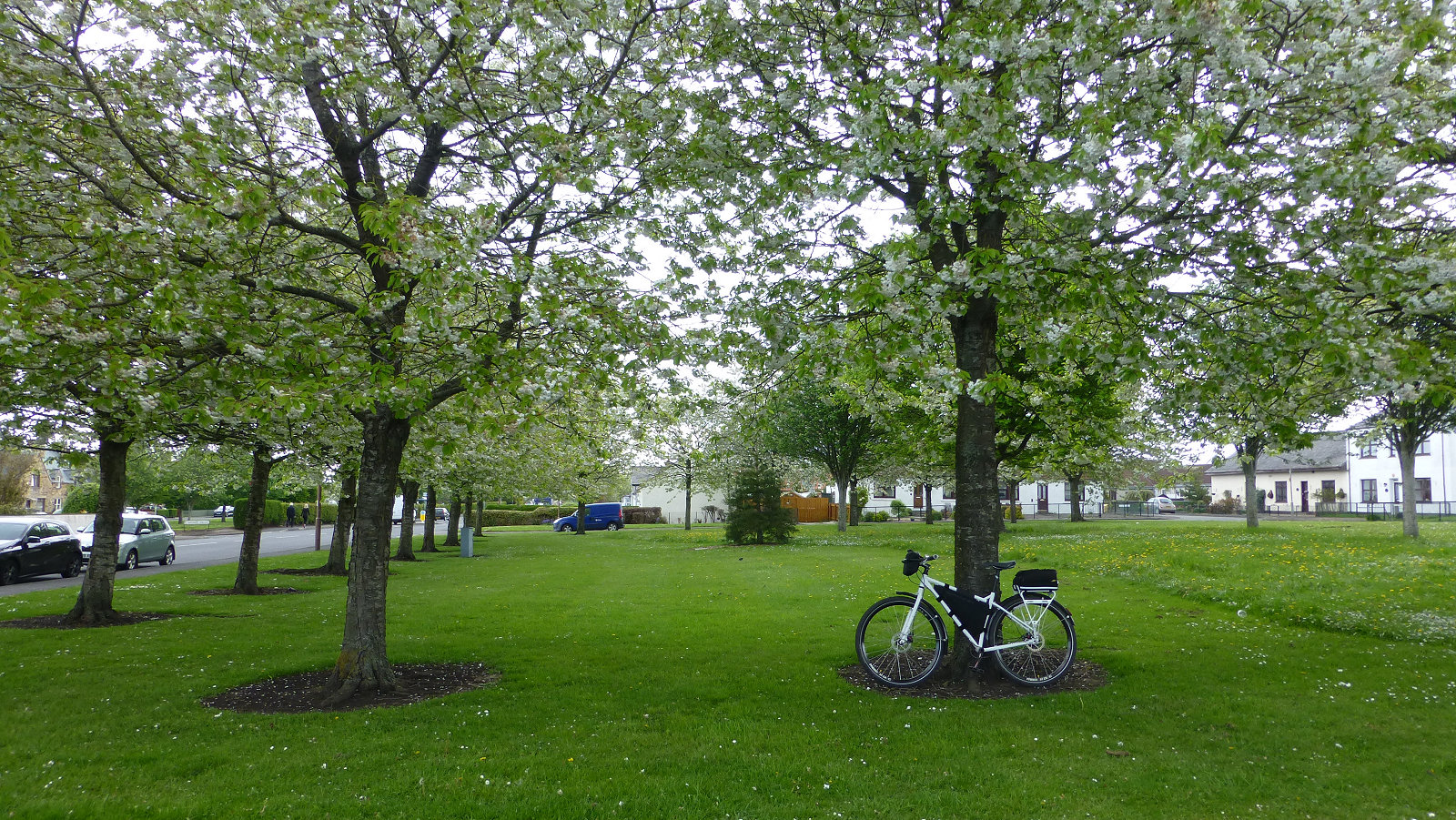 The first of them was zone ShoreItIs, at the site of the now demolished Cockenzie power station. I recall that I was concentrating so much of riding the loose gravel and avoiding dog walkers, that I missed this one completely and didn’t realise until back home. Wallyford was next, for zone RentonsRun, then down into Musselburgh for two zones at Levenhall Links, the BigAsh and AshBends. I did pick off a quite a few more zones on the passing but it was nice not to be stopping for each and every zone in the area and just enjoy turning the pedals as I was getting a bit weary by now. The rain also started, and short sharp showers accompanied me all the way to Dalkeith, there the roads were bone dry.

Overall a grand, though somewhat tiring and long, day in the saddle. I’d added 49 unique zones to the count, taking my total to 583, with only 417 now required to reach that magic figure of 1000 and the 1000 Unique medal. Takes for the day stood at 122 which I’m more than happy with. Not doing so well with round points, only 98,000 so far and some way to go to better my personal round target of 250,000. But on the plus side, my last day at work is Thursday 2oth May, only 5 days away and there will be spare-time-a-plenty after that. Keep on turfing!