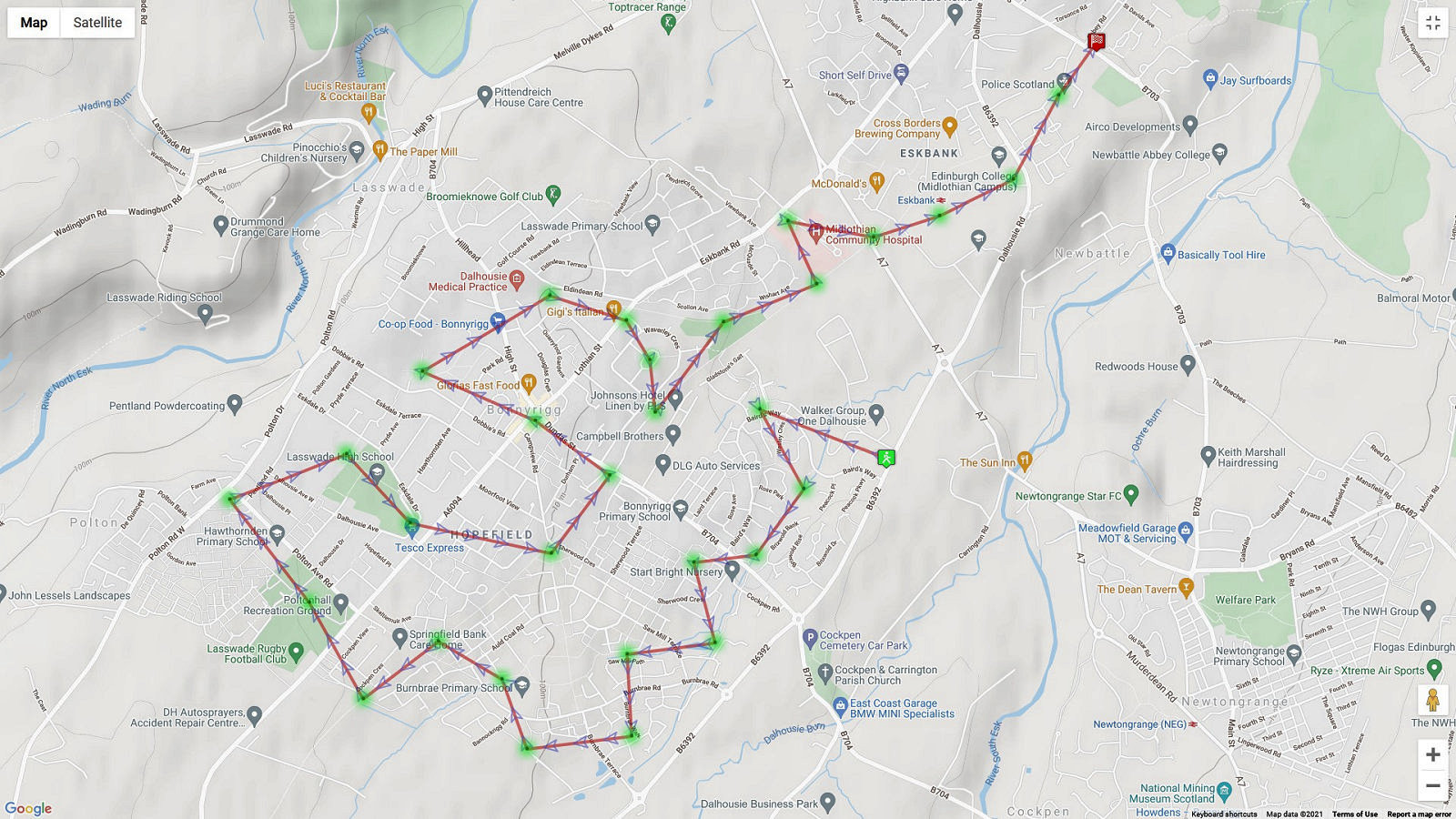 My turf thoughts have been looking at the Darkest Ninja medal, taking 30 zones between the un-godly hours of 2.00 am and 3.00 am, for some time, but my attempts have been thwarted for various reasons. However, everything was set for an attempt this morning. The zones had been cleared for me by the lovely Féarglas, a few days previously, and all my planning was a good as it was going to get. My list of 30 carefully selected zones was ready, all local here in Bonnyrigg and Eskbank. Even the weather was looking good with no rain forecast, the streets were dry, any wind was minimal and while the temperature was on the cool side of 10 Degrees, nothing to complain about.

I set my internal alarm clock for 1:30 am. This would give me plenty of time to get ready for the attempt, get my turfing gear on, ready the bike from the shed and head around to the start zone, WayOfBaird, just a minute from the house. It also gave me enough time to take PeacocksBeard, a nearby zone I’d left clear to check the Turf app and GPS was working okay and get that all important 5 second bonus off the take times. The remainder of the time was spent cycling around the start zone and getting my leg muscles warmed up.

I spent a lot of hours planning this run, carefully checking each zone in turn. I used Google maps to find the most efficient route between zones while also using my local knowledge of the ground conditions, for example, was the road surface better than the pavement, where the drop kerbs were located, the location of steep climbs and fast descents, and so on, even the prevailing wind direction. The bicycle had also been made ready. Chain cleaned and lubricated, brakes checked and tyres pumped up near maximum for minimal rolling resistance. My tyres have a pressure range between 30 and 70 PSI and I usually run them around 55 PSI for mixed terrain but upped them to 65 PSI as most of the route was on tarmac, with only a few short sections on grass.

By 1:55 am, I was waiting for the off. But first a quick check on the Turf app to see if any other turfers were in the area, or even heading this way. If they were, I would probably have to abort, but thankfully I was the only turfer daft enough to be out turfing at Silly O’clock, not just here in Bonnyrigg but in the rest of Scotland as well. So, no turfer audience to watch my endeavours, success or fail, just a lone herring gull and a pair of oystercatchers watching from the grass not far away.

At 2:00 am precisely, I started my attempt at the Darkest Ninja, riding the bike forward into zone WayOfBaird, then it was off taking zone, after zone, after zone. I knew I had to really push myself and no pussy-footing about, no stopping for a call of nature (just have to grin and bare it), no stopping to remove a layer of clothing, no stopping to watch the foxes at play outside the chip shop, I just didn’t know if this set of 30 zones could be taken in under 60 minutes. Only way to find out was to try.

By the 10th zone, Skeltiemuir, I was a third of the way round and only 15 minutes had expired. So far, things were looking good. By design, I started off with the zones that required uphill ascents, while my legs were fresh and able, and 5 minutes later was at zone ArgylePlaza, the highest of the zones and it was either downhill or flattish for most of the remaining zones.

At 02:33 am, I was taking TongueSpatula, two-thirds of the way round the 30 zones and I still had 27 minutes left for the next 10 zones. It looked like my plan was coming together but nothing was certain and I still had to keep pushing hard. At 02:38 am, I’d taken zone WaverleyPath, then it was all mostly fast downhill to the end, something I’d also designed into the route to allow me to really turn those pedals if it looked like time was short and also make use of gravity and good wide smooth stretches of tarmac.

Ten minutes later, I was crossing the A7 Trunk road and taking zone A7View. A total of 43 minute had passed, leaving me with 17 minutes for the final three zones, Eskbank at the railway station, CollegeZone at the college and the final zone, BikeSlooowly at Police HQ. Plenty of time to spare, and I was now fairly confident, barring some unforeseen problems such as a puncture, being abducted by Aliens or worse, *badgers!, that the Darkest Ninja medal would be mine.

Eskbank zone, hidden in the darkness of the railway station was soon taken, followed by CollegeZone. Then it was a quick sprint through the houses to BikeSlooowly, located on the cycle path outside the Cop Shop. I skidded to a halt and eagerly awaited the zone to take. Then the seemingly eternal wait for the pop-up to appear. And it did a few Nano-seconds later. The Darkest Ninja medal was mine. I’d done it and was really pleased that all my time and effort has come to fruition. I was a very happy bunny indeed! I actually continued to the next zone, Beatles, a spare zone I’d kept in the back pocket just in case I’d missed a zone on the way round but thankfully it wasn’t required.

After using the bench for a short breather, it was nice to make the journey back home at a more sedate pace, gently turning the pedals for Bonnyrigg, cooling down after my intense efforts, looking forward to a nice cup of tea, then back to bed. I’ve actually been out turfing most nights this week and could do with catching up on some sleep. It was also nice to see the first light of dawn starting to glow in the east, and the birds were beginning the daily ritual of the dawn chorus.

Into analysis mode. I’d taken 47 minutes for the 30 zones, leaving a good 13 minutes’ spare. Which means, if I can do it, so can you and I’m 60 years old in November and will soon be getting a bus pass! I don’t think I would change anything, neither the route or the choice of zones as it all seemed to work out perfectly. A good job done. One final thought. Wouldn’t it be really Deadpool cool if, once you’d achieved the Darkest Ninja medal, that you could have two Ninja swords on your turfman icon. Just a thought, and perhaps a hint as well.

If anyone has found inspiration here and fancies trying for the Darkest Ninja medal themselves, the zones, in order of taking and also showing my times between takes, are listed below, and if you want a guided tour around the zones, to familiarise yourself with the area, please get in touch and I’ll be happy to assist. My services are free, though donations of chunky Kit-Kats are most welcome. There’s a contact form above.

Darkest Ninja – A medal awarded to the mighty ones who have taken at least 30 zones between 2am and 3am.