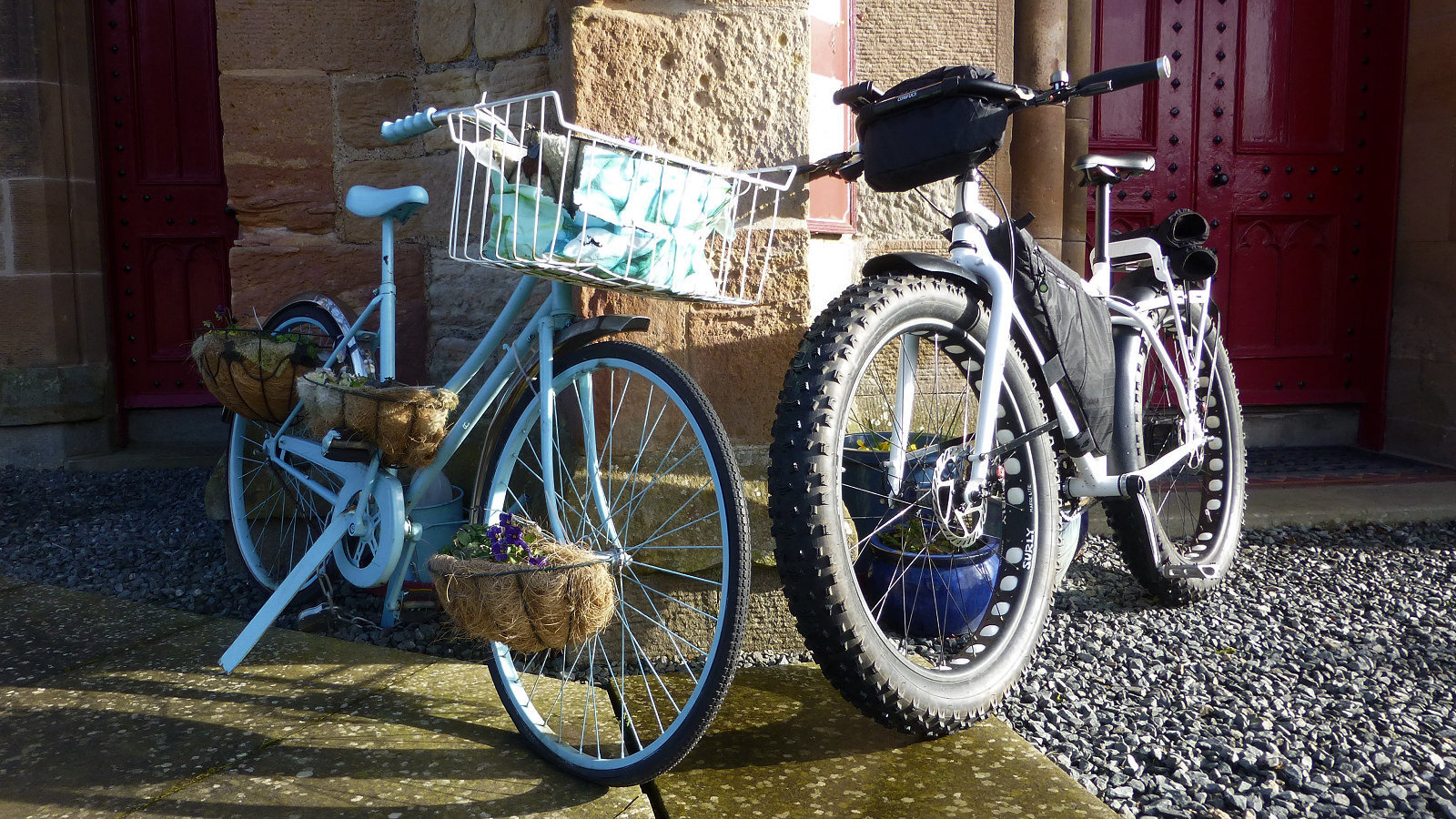 Having stripped down my Surly Pugsley fat bike recently and given him a complete overhaul, including new brake blocks, new chain ring and rear sprocket and a new chain, I’d still not given him a thorough road test after the rebuild, so thought today was the day. I had hoped that the recent stormy weather would bring some decent fat-bike friendly snow but only a few meagre flurries of sleet fell from the skies. There was snow lying up in the Moorfoot Hills, but Cathryn was using the car, so local trails and zones would have to do.

A couple of local zones were easy takes, Pittendriech and Brixwold, both on small footbridges across the Pittendriech Burn, which was still running high and fast after recent rain. This was a sure sign that the trails I was aiming for today around Dalhousie Castle and Newbattle Abbey would be mud, mud, glorious mud. Next zone on the route was KirkCockpen, where Pugsley took the opportunity to chat up his bicycle lady friend at the church doors. I had to drag them apart when they started rubbing tyres. Cannot have that sort of thing going on in public.

Sure enough, the trail through Dalhousie Castle was lovely mud, that really sticky glutinous mud you get after rain and sleet. But the great thing about riding a Surly Pugsley fat bike was that it doesn’t matter. On foot, you tend to look for the less muddy route but on the fat bike you just blast on through. The chunky Surly Nate tyres cope with just about anything. The only limiting factor is the rider, either in leg strength or technical ability.
DeanWoodTurn was next, then a quick slippery cycle up the Castle Dean Burn path gave me DeanWoodPath on the old footbridge. I noticed that Spring seems to be fast approaching with the fresh green shoots of wild garlic and bluebells starting to make an appearance. The snowdrops are already in flower. This area is well worth a visit in March/April when everything is in flower. It’s quite an impressive sight.

I now retraced my pedal revolutions back down the burn and at zone DeanWoodTurn peeled off to the right for Dalhousie Castle, stopping briefly to take zone Dalhousie in the parking area. After the steep, but thankfully short, climb up the entrance road from the Dalhousie Castle, I turned right and splashed by way along the potholed road to Grove Farm, first taking the zone of that name and also zone ByEskWeir. I could hear the weir was running high but didn’t stop to look. A huge puddle on the path was great fun and also removed some of the accumulated mud from the bike. Glad I refitted the mudguards as I was considering leaving them off.

My plan now was to loop around the woods at Newbattle Abbey, picking off a few of the red zones and one zone still a yellow neutral, most of them taken from turfer MuttsCycles. First on the list was zone TheRedWoods where I stopped to remove my jacket. I’d dressed for much colder weather and was not expecting to only end up only wearing a t-shirt and light fleece. I stashed the jacket inside the frame bag.

Now, between zone TheRedWoods and the next zone, TheSouthPath, there’s a set of wooden steps. And while I’ve negotiated these steps without mishap many a time, either on foot, with the kick scooter or with a bicycle, and also at night on various occasions and know they can be slippery when wet, yes, you’ve guessed correctly, I slipped and fell on my arse. Not only that, but Pugsley thought this was jolly funny and decided to fall on top of me, pinning me down on the wet leaf-covered steps. Thankfully no-one was about to see my embarrassment. I’m sure they would have laughed. I certainly would have. My butt got wet as well!

After zone TheSouthPath, with 185 points and another 50 bonus points, a long slow climb along Roan’s Dyke, then left along another very muddy section of the trail, gave me zone Maryn nmed after the Mary Burn. From there my route was now downhill, keeping my speed slow to avoid throwing up too much mud and muddy water. Zone TheNorthPath was easily taken, then across the footbridge and along to Newbattle Abbey College for zone BattleAbbey, located in the ornamental gardens. Continuing downstream, I picked off zone SouthEsk, at Maiden Bridge, then started for home, adding a few revisits and some takes in Kirk Bank Wood, before finishing off with zone StoneGate and PeacocksBeard.

Overall, a most enjoyable 90 minutes cycling and 20 zones taken. Oh yes, there was one highlight I’ve not yet mentioned. I came across a family group and a wee lad shouted out, “Monster bike!” Fair made my day and the look on his wee smiling face was priceless. And finally, Pugsley was running fine after his rebuilt. Only a few adjustments were required, tightening up the front brake cable clamp and tilting the handlebars downwards slightly. Not bad at all. Back soon.