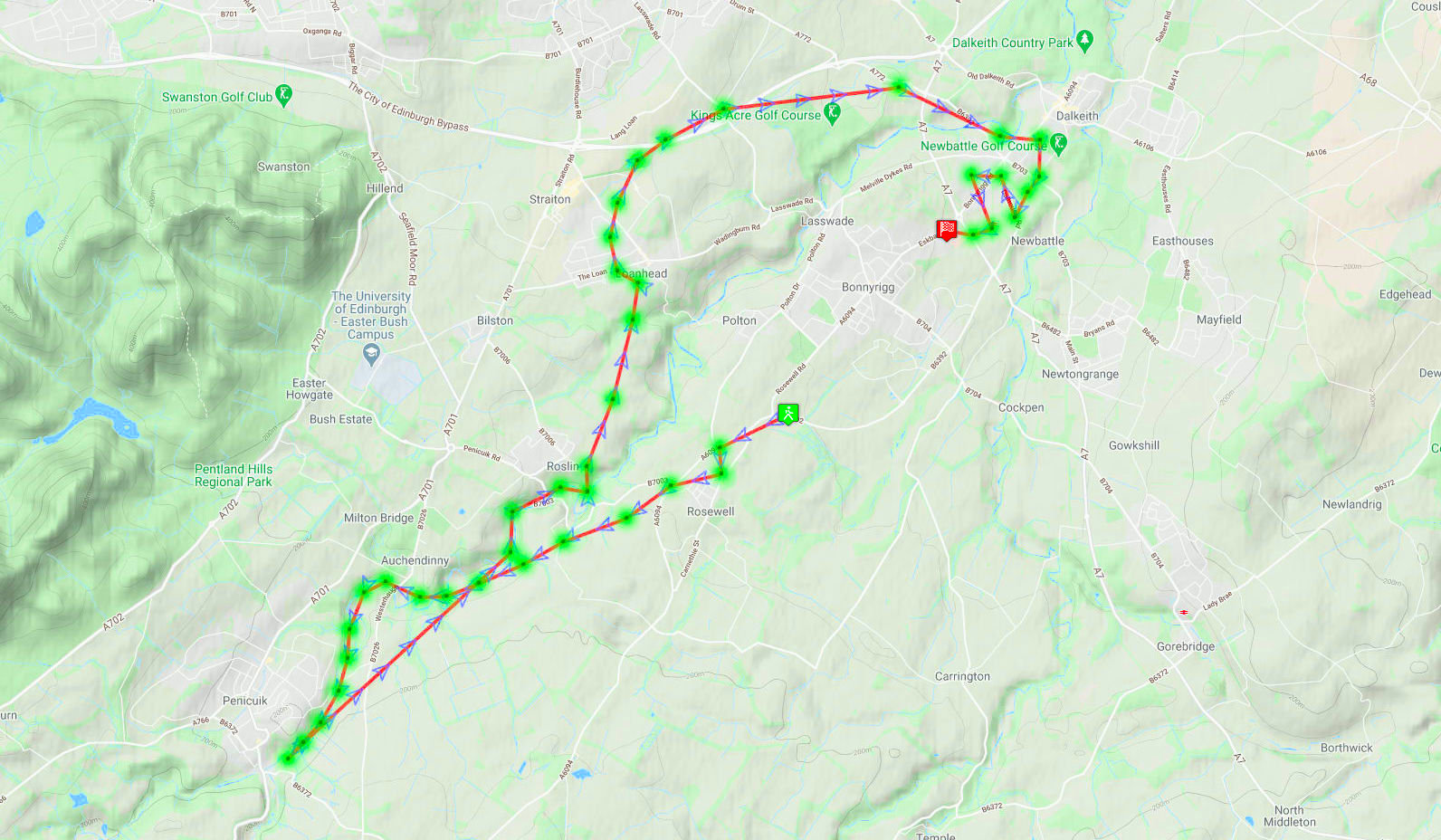 With icy roads and pavements yesterday I’d left the bike in the shed and taken a few zones on foot but a layer of snow had fallen overnight and crisped up nicely, making ideal conditions for fat biking, the crisp and crunchy snow offering plenty of grip even with ice underneath. My plan this morning was to follow the Dalkeith to Penicuik cycleway up to Penicuik, taking zones on the way, then head back via Roslin, Loanhead and Eskbank picking up further zones on the way home.

I joined the Dalkeith to Penicuik cycleway in Bonnyrigg, not five minutes from the house and started the long slow climb towards Rosewell, the 100mm wide tyres of the Surly Pugsley fat bike giving plenty of confidence inspiring grip on the snow and ice. My first zone of the day was HopeBridge (185 points), just as you leave Bonnyrigg, quickly followed by ExitRosewell (185 points). From there I slipped into Rosewell and took HolyStMatthew (185 points) at the entrance to St. Matthew’s Catholic Church, the only zone in Rosewell to date.

I now headed back along the Dalkeith to Penicuik cycleway, taking HighPark (170 points), after an awkward and slippery ascend up some steps. Without any zones to take – I decided not to do any re-visits – it was nice just to turn the pedals and blast along the old railway line, passing again all the dog walkers, cyclists, runners and so on, that I’d passed earlier.

My next stop was the site of Roslin Gunpowder Mill, there to take NoSmoking and ThreeHares, both for 185 points. A short stretch of B7003 brought me to Roslin Glen Country Park to claim RoslinPark (170 points). Then a footbridge across the River North Esk and a steep and muddy bike-hauling flight of steps saw me emerging at RosslynCastle for 170 points. This was followed soon after with RosslynChapel for another 170 points.

With no zones at all in Roslin, I now followed another cycleway, one that eventually ends at Shawfair, a good five miles away. There are three zones to take between here and Loanhead, RoslinBattle (185 points), BilstonGlen (185 points) and Burghler (170 points). Now, between here and where the cycleway passes under the A720 Edinburgh By-pass there are no zones but there are three in Loanhead itself and LoanHead (155 points), ZoneMayBurn (155 points) and TheMayFlower (155 points) were all easy enough to find thanks to the wonders of GPS. These three were the lowest point scores I’d taken to date.

Leaving Loanhead at Straiton, I picked up StraitonPond (170 points), a local nature reserve, then re-joined the cycleway, taking GrafittiZone (170 points) immediately after passing under the city by-pass. There was one final zone on this part of the route, LassieBridge (185 points), at Lasswade Road. With no further zones on the route between where I stood and Shawfair, I decided to pop into Dobbie’s Garden Centre for Entomophobia (155 points).

With my points tally now over 31,000 I was well pleased with this morning’s effort and my rank had been upped to Rank 13 – Advanced Explorer. The medals tally was also on the increase with Greed-50, Greed-75 and Take-100 joining the collection.

On today’s zone bagging trip I’d used my new mobile phone handlebar mount and what a difference it makes compared to carrying the phone in the handlebar bag. However, a couple of issues have come to light. The first is phone battery capacity. I started this morning with 100% charge and four hours later was at 50%. But easily solved with an external battery pack which I can carry in the handlebar bag. The other issue was the Turf app lock-screen kicking in, usually at the most inconvenient time. I’ve set “Always keep screen on” to on but still it occurs. This was resolved by installing a free app called Game Launcher, you run this app first, then run Turf from within it. Works a treat. 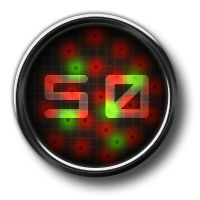 Greed-50 – The greedy turfer who holds at least 50 zones at the same time is awarded this medal. 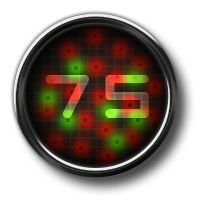 Greed-75 – The greedy turfer who holds at least 75 zones at the same time is awarded this medal. 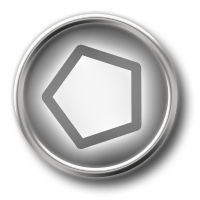 Take-100 – This medal is distributed as you perform 100 takeovers in total. (revisits not included)