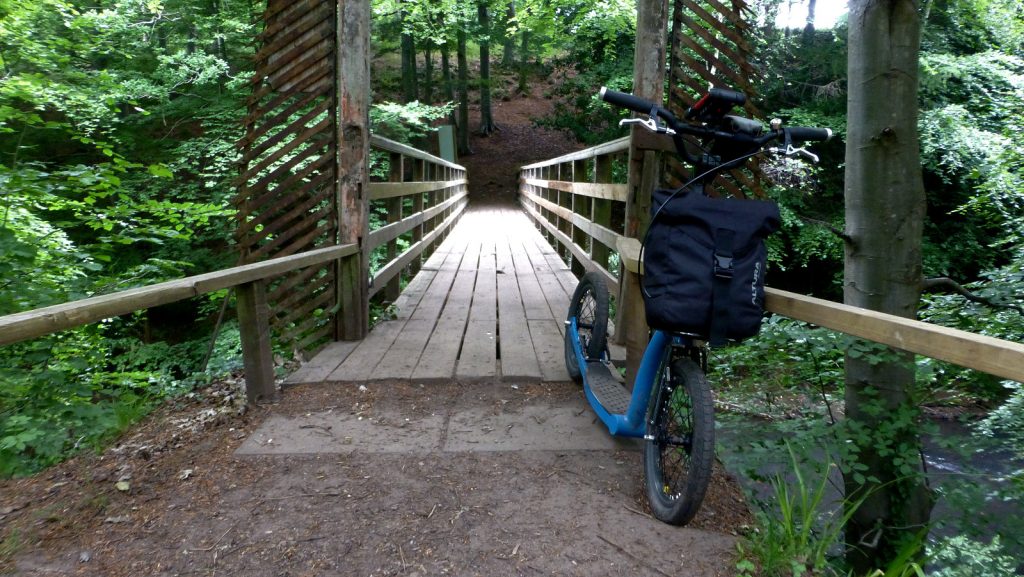 Out for my Daily-Five this morning, an easy kick scoot on the Swifty Air around Bonnyrigg. It was nice to have no fixed plan to take all the zones, as is my usual modus operandi, just scooting a random circuit, picking off zones here and there, leaving some and taking others. Did feel a bit odd not to take all the zones but found it more chilled that way. No urgency to gather points, just enjoying the scoot.

Being on the kick scooter my thoughts were on something I’d read online about a coming announcement on the 10th May by Transport Minister Grant Shapps, regarding plans for new regulations on e-mobility devices, such as electric scooters, here in the UK. I’ve been holding off my plans for purchasing an e-scooter – I was thinking of getting one of my Swifty kick scooters converted – giving me a 25 mile range on full power or up to 50 miles on kick assist. It’s not a cheap conversion and I don’t want to proceed until I hear what the news legislation will be. Fingers crossed it will be based on common sense. Should be a great option for turfing further afield.

One place I’ve always wanted to do a night turf on the kick scooter is Dalkeith Country Park. However, the gates close at 7.00pm and I’m not paying £10.00 a month for a Friends of Dalkeith Oak membership which permits gate access 24 hours. However, thanks to local turfer MuttsCycles, I now know how to access the park in the wee small hours or Silly O’clock, as I prefer to call them.

I was watching him out turfing the other day and noticed he was at zone Newton Church at 20:14 then at zone BridgeOfFaith only four minutes later at 20:18. I assumed he must have jumped the estate boundary wall but that wouldn’t exactly be easy on a bicycle, which I assume he was using from the times taken to travel between between zones. Of course, he might just be a super-fit turfer. So, on my visit the other day while getting my Daily Five and hunting for goblins photographs, I set about investigating.

It didn’t take long to find out how he accessed the park, there’s a gap in the wall, with a handy rope to help. Then I recalled a conversation with turfer Fearglas some time ago and she mentioned about a rope over the wall. I’d had completely forgotten about that. Mr Dozy Haddock that I am. So, I now have an access to the park after hours. Yes, a bit of a long way round via Millerhill but I can live with that.

Now, having got myself all excited about clandestine midnight turf/kick scooting mini-adventures, I was both dismayed and pleased to discover that Dalkeith Country Park now offer something called Friend of Dalkeith Acorn Membership. For £12.00 annually, you are provided with a card which opens the pedestrian gate, that’s the one located beside the Town Gate in Dalkeith, out with normal opening hours. Exactly what I’m after. Just waiting for my card to arrive. Looking forward to some interesting mini-adventures, which I will, of course, be posting here. And while we are talking about mini-adventures, I must really turf a couple I’ve been forgetting about. One is the 13-mile Water of Leith Walkway, from Balerno down to the docks at Leith and the other is the more challenging Seven Hills of Edinburgh route.

Finally, and while not strictly turf related, but not having your car stolen might hinder your turfing abilities, I want to share something we purchased recently. I’m a keen fan of watching Police Interceptors and Traffic Cops, and in one episode it showed some car thieves using electronic devices to scan for the key signature to a BMW car. They then loaded the details onto a blank key and stole the car. Took them about 2o seconds.

So, I decided this would not happen to my beloved *car, and purchased two Defender RFID Signal Blocking Pouches on Amazon, at £4.99 each. You pop your key in the pouch and it blocks the signal. I tested this works by placing the key in the pouch, sat in the driver’s seat, then checked it would not start the car. It worked perfectly, the pouch that is, not the car, it failed to do anything. Good peace of mind for £4.99.

Now, where can I get one for my head to stop the cosmic rays affecting my brain? I don’t think the aluminium foil works very well. Back soon.