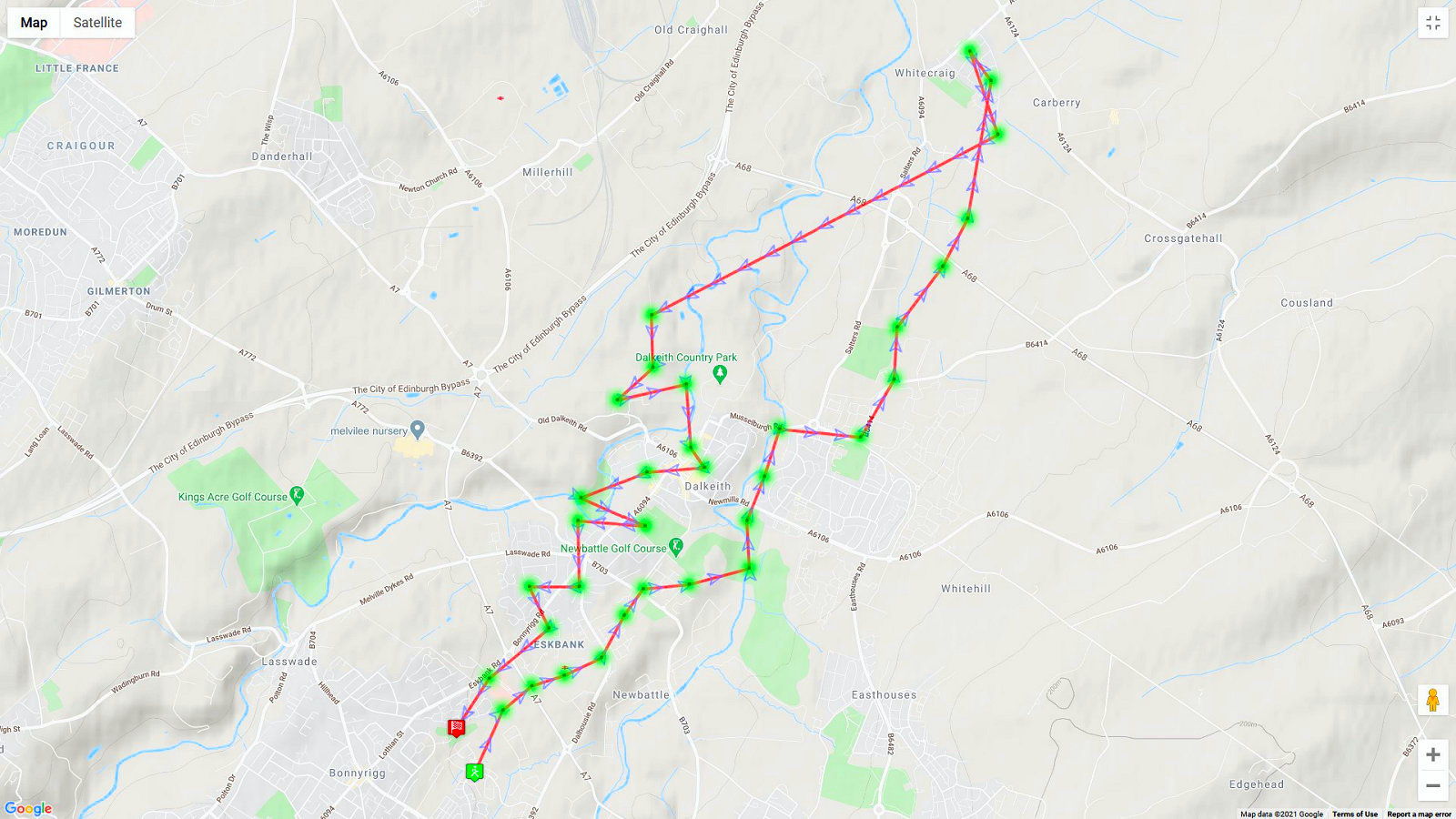 Before heading out turfing this morning, I had some choices to make, mostly revolving around the state of the snow and ice and which bike to take, the Surly Ogre which is more kitted out for tarmac and dry conditions, or the Surly Pugsley fat bike, ideal for hard pack snow, slushy snow and watery ice, and snow-melt muddy off-road conditions. While the snow outside the front of the house was largely gone overnight, I suspected that some of the more sheltered areas would still have that nasty mix of compacted snow turned to ice and slush after countless footfalls from local people out walking. I erred on the side of caution and wheeled Pugsley from the shed.

I like to start off with an approximate route plan and this morning decided to head through Dalkeith and follow the cycleway to Whitecraig, then loop back through Dalkeith Country Park, picking off zones on the way. A whole bunch of the usual suspects zones were taken as I rode, first through Eskbank, then Dalkeith, including a revisit to WayOfBaird (93 points), then Wishart (170 points), then A7View, Eskbank, CollegeZone, BikeSlooowly and Beatles, each with 155 points. 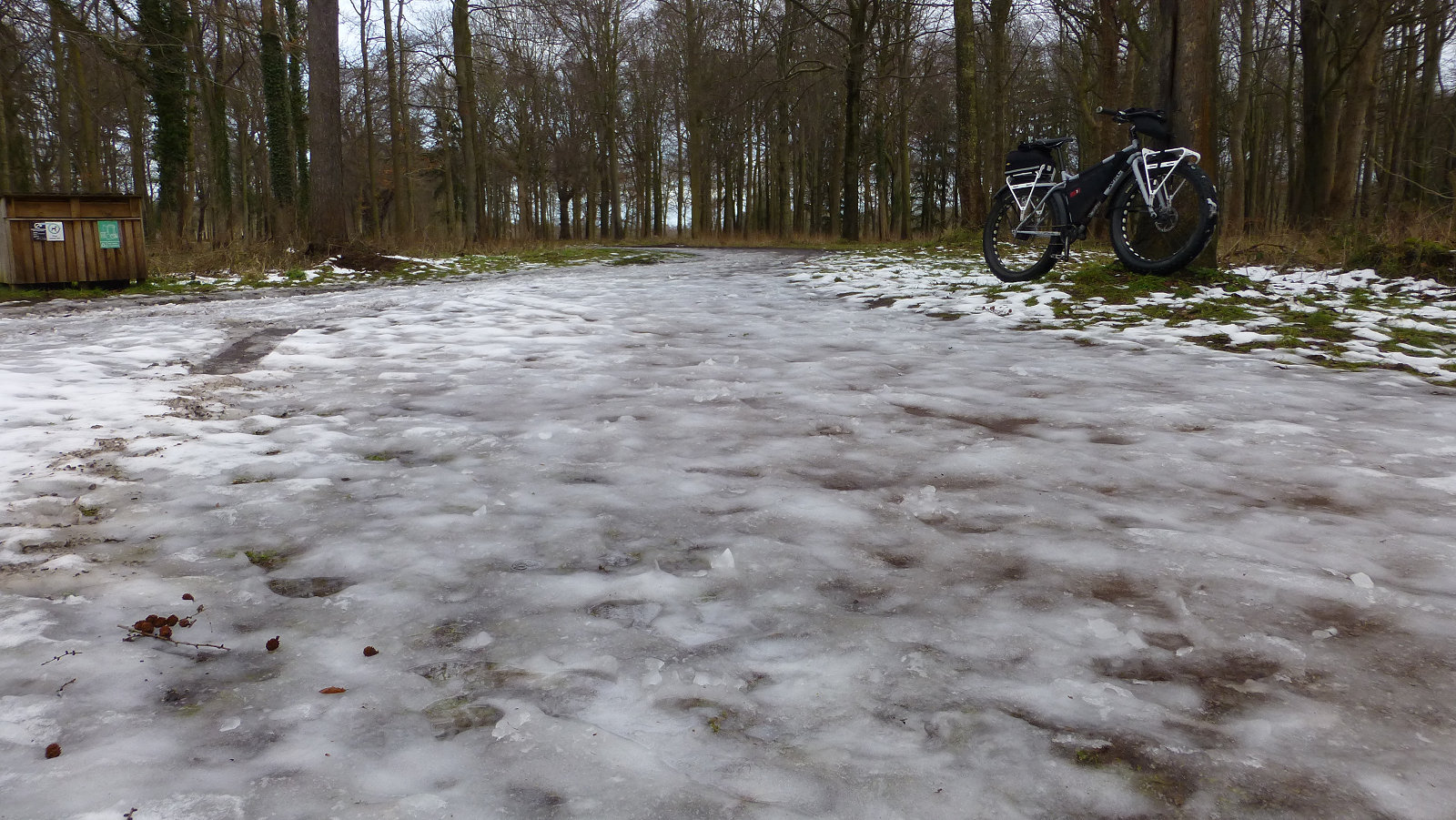 Then three 170 pointers, BattleForrest, SouthEsk and finally a very slippery Peppermint. Next an even more slippery JamesTheLean and TheGuitar, both with 155 points and I was now approaching the outskirts of Dalkeith. Conditions underfoot, or rather under Pugsley’s fat tyres, ranged from lovely, beautiful and smooth dry tarmac to compacted evil snow/slush/ice, with a surface that seemed expertly designed to make your back wheel slip sideways and your front wheel to slip in the opposite direction. Oh what fun!

Next a few zones around Dalkeith High School, starting with ThriftShop, followed soon by DalkeithHigh, then ExitDalkeith, all for 155 points each. Joining the cycleway to Whitecraig, I was again on the slippery stuff, more than once doing that old squirrelly dance while attempting to stay upright. And, all the time keeping an eye out for all the dog poo, now visible with the snow melting, that owners have failed to pick up after their dogs. Why don’t they just bag to and take it home? They are probably walking there every day with their dog and having to avoid standing in the same dog poo that their pooch left yesterday. Most annoying. 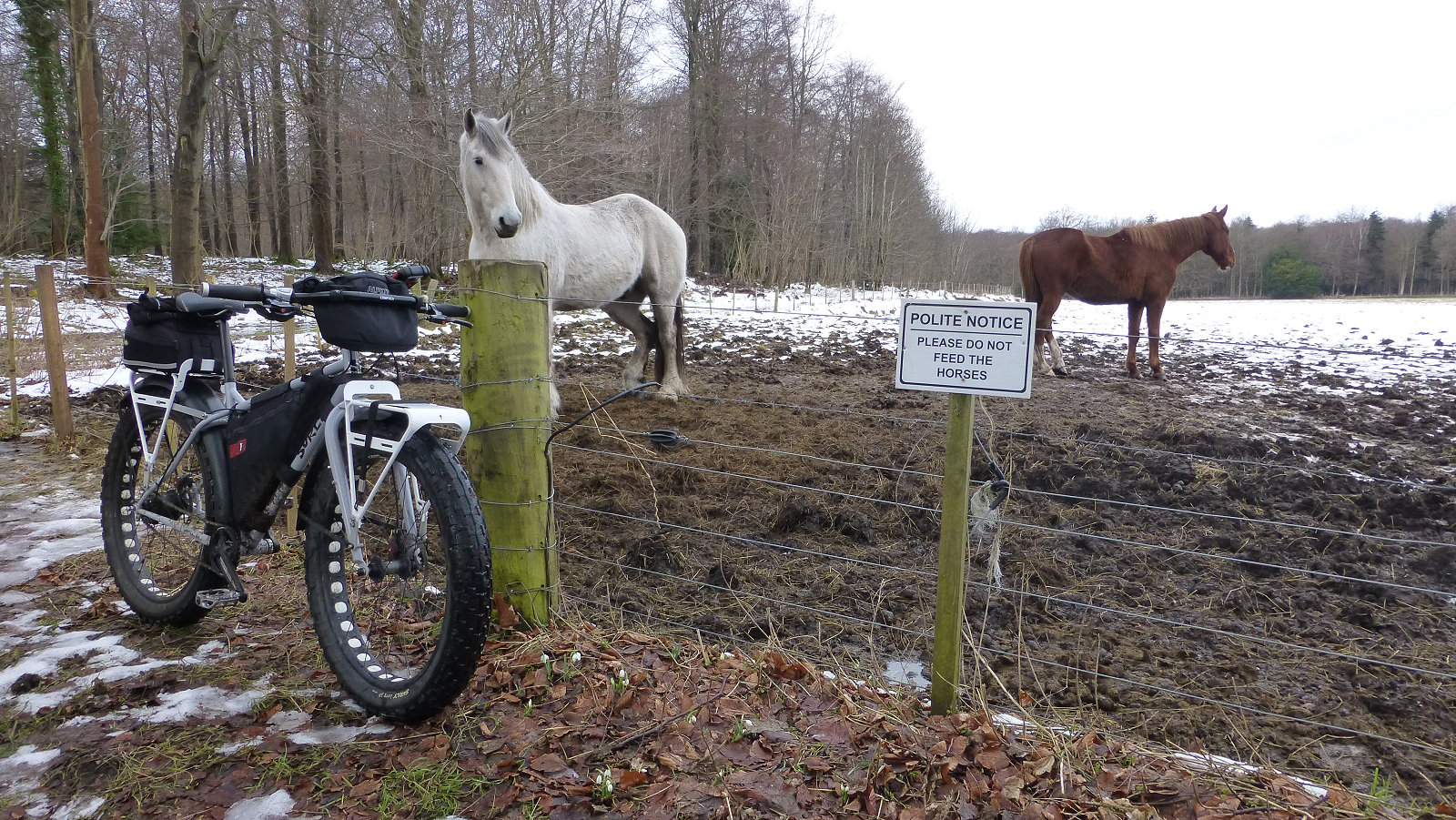 Smeatonhead and PowerTurf zones were next in line to fall, giving up 155 points apiece. Then it was down into Whitecraig for Deantown and Whitecraig, again 155 points each. It was only then that I’d realised I missed a zone, CraigTheWhite (155 points), so backtracked onto the cycle path take it. I had been too busy trying to stay upright on the icy path, actually following a narrow ice-free channel of meltwater, that I missed it completely. Ho-hum.

After a short stretch of the A6094 Salter’s Road, I dropped into Dalkeith Country Park at the Smeaton Gate, and headed for the nearest zone, DoNOTCrossEsk. I ignored the makeshift signs saying No Access – I’m fairly certain this is contrary to the Land Reform Act 2003 – and followed the mud, slush and ice covered track, stopping at the zone. However, I must have been too busy taking photographs to actually take the zone and it was only later that I realised Cruachan still owned the zone. 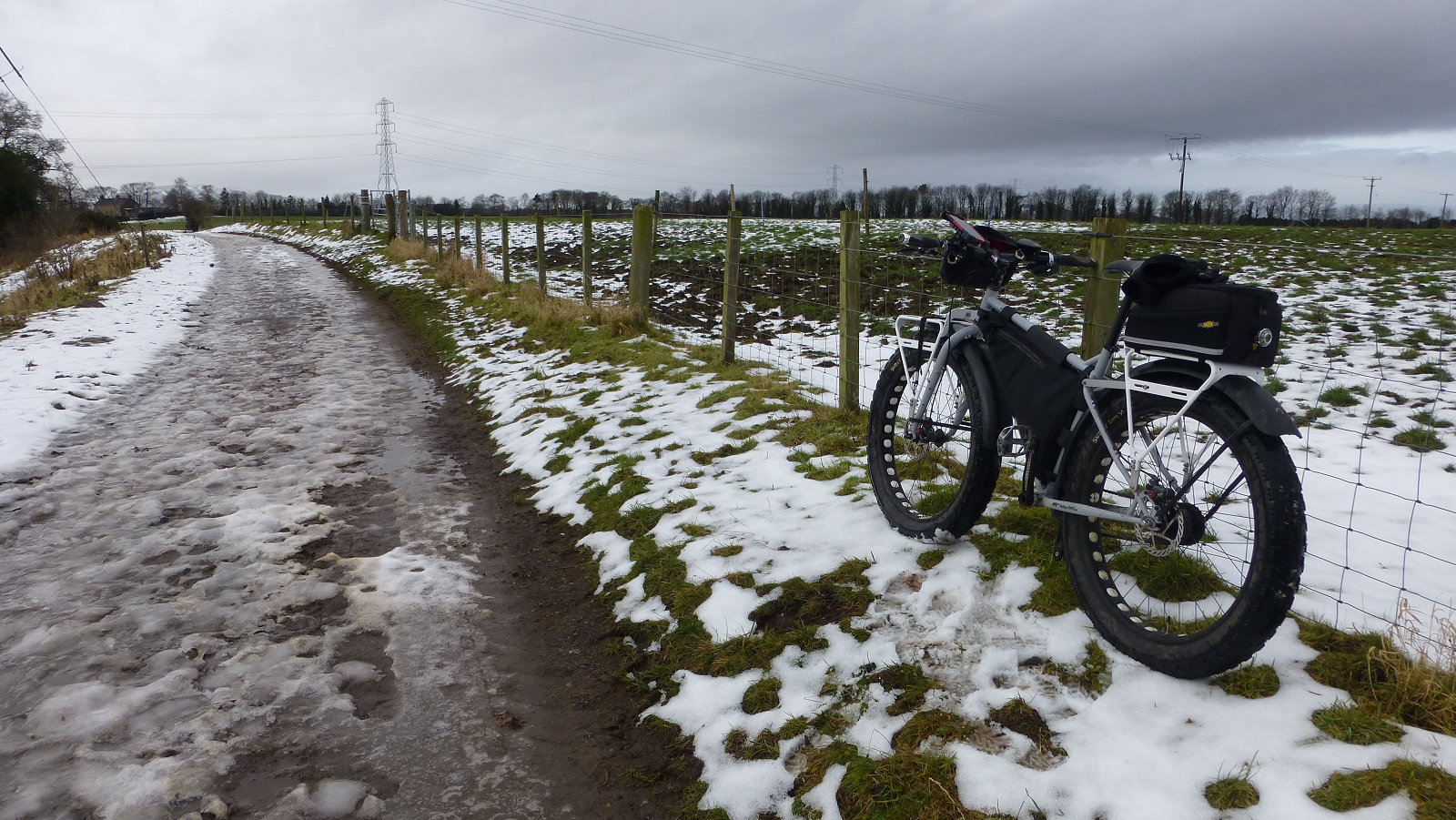 BridgeOfFaith was the next zone on my list but the bridge was closed and barred. I could have been a naughty boy and clambered over to take it but must have had my Captain Sensible hat on today and settled for a photograph instead. There will always be another time, such is the joy of turfing. I noticed that this part of the park, the Old Oak Wood, is a Site of Special Scientific Interest (SSSI) and out of bounds to bikes. I’ve walked this way before and the ground is very muddy and easily damaged, so fair enough. 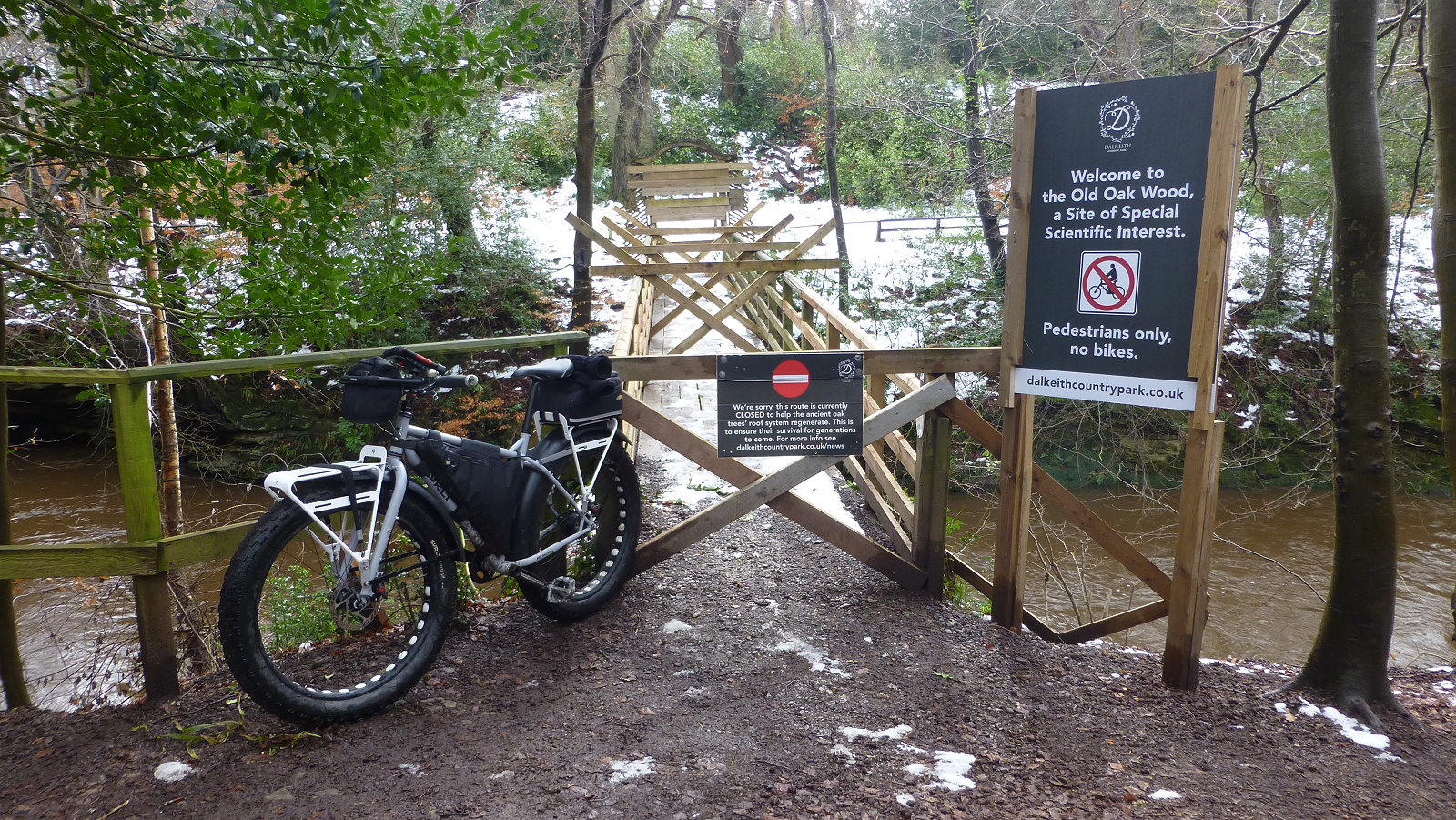 HowlandsPark (170 points) was next, then it was across to LugtonCross (185 points), followed by a tricky ice-path cycle to LugtonBrae (185 points). An equally slippery trail led me down to the River North Esk and zone SneakyPlace (170 points) located beneath Dalkeith House. There was another couple of zones I could have taken, ParkeOfSteel and DalkiethHouse but I’d had enough of mud, slush and ice for the day, and headed into Dalkeith town centre to grab a few more zones on the way home. 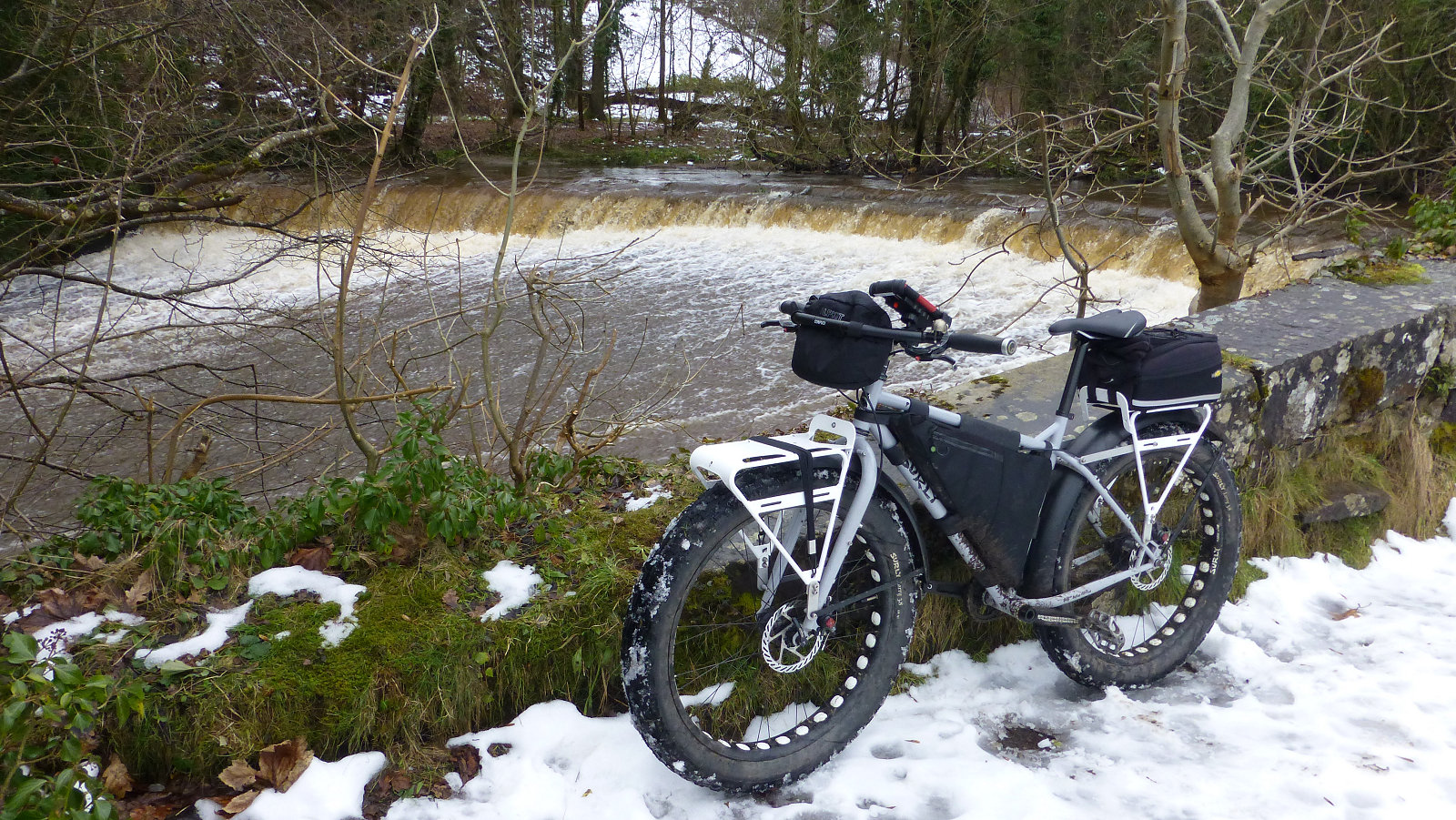 Most were old pals by now, having taken them more than once. I started with HolyBuccleuch (140 points), then SayAhhh (155 points) and HolyDalkeith (170 points). Then it was fast downhill to Ironmills Park to take a zone I’d suggested recently, WeirHere, and 185 points. The weir once fed water to a number of mills that once existed along the North Esk in Dalkeith.

And it was now time to head home for the day. My legs were a bit weary after yesterday’s snow cycle to Penicuik and now that warmer weather was with us, I wanted to give all my bikes a good hose down to remove all the crud, and importantly salt, they’d accumulated recently. On the way, I picked off another seven zones, bringing my round score up to 41,200 points and my overall total to 208,200 points.