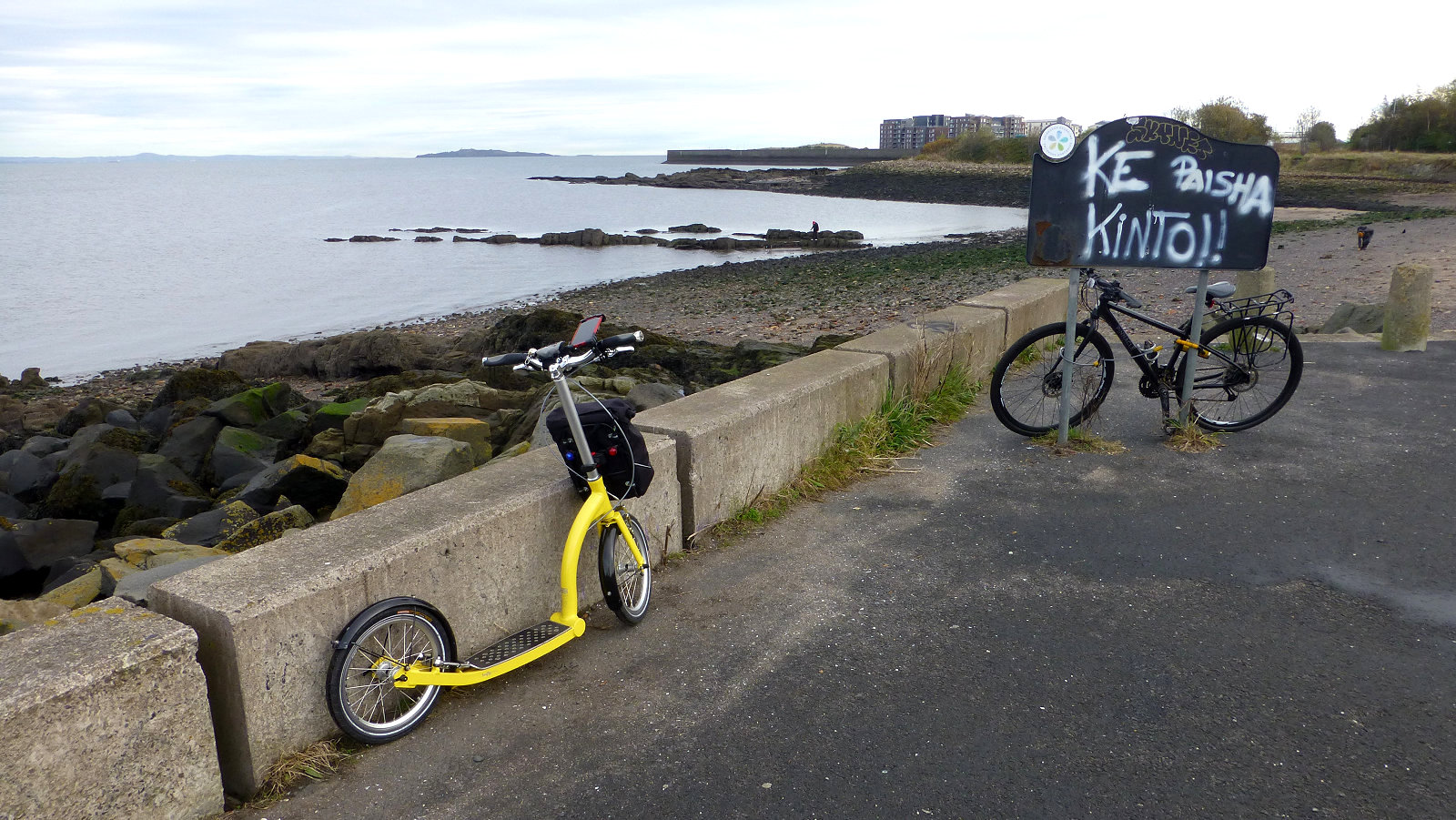 Having recently order another kick scooter, the folding Swifty One, I felt the need to be out on the kick scooter again. But there was the problem, I just couldn’t decide where to actually go. On the plus side, I had the car at my disposal today, so anywhere was possible. Initial thoughts were either Haddington and East Linton or North Berwick, but I eventually decided, after much changing-of-the-mind, to take the Swifty Zero across to Cramond village and head east along the shore. My plan was to scoot as far as Leith docks then return via the old railway line paths, now serving as shared cycle routes, back to Cramond.

Setting off around 9.00 am was not a wise move. The bloody A720 Edinburgh City Bypass was its usual tortoise slow, no snail slow, self. Opposite Hillend, I was down to 10 mph. I could have ridden the Swifty Zero faster than 10 mph. And the reason for this, rubber-necking drivers slowing down to ogle the recovery of two vehicles in the opposite lane following an incident. I hate the term accident. Accidents don’t just happen, driver error happens. However, stay calm, take long slow deep breaths and relax. So glad I’m no longer commuting to work in Edinburgh every day. Also looking forward to the day I can jump on the bus with my Swifty One, flash my new National Entitlement Card (bus pass), and travel free into Edinburgh and a days care-free turfing. 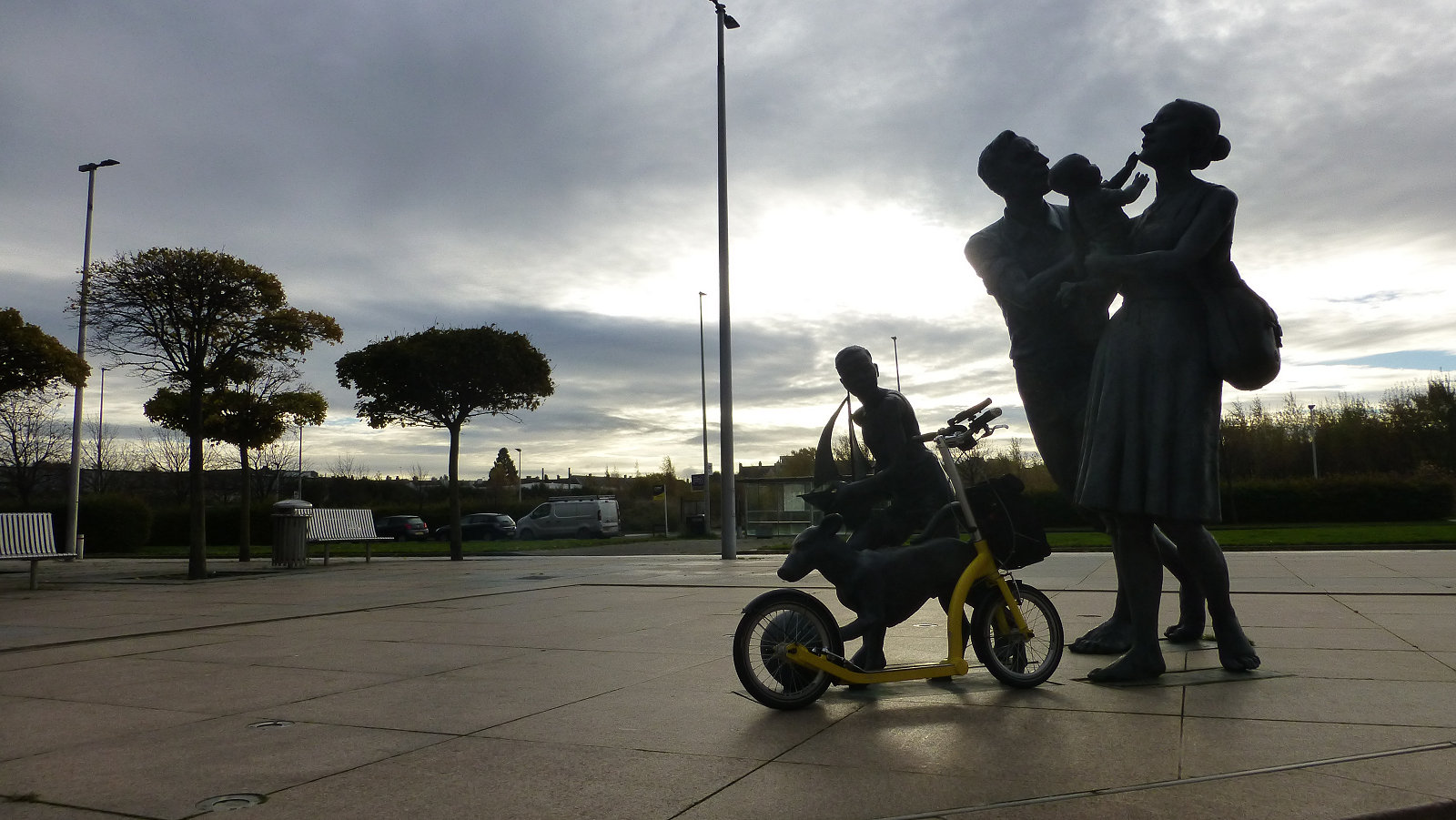 Starting point this morning was the large parking area at Cramond village, already quite busy with runners, massive dogs taking their owners for a walk, illegal e-scooters, mothers and grannies pushing expensive prams and even a few well-wrapped tourists as well, though nothing compared to a bank holiday weekend. Readying the Swifty was a doddle. Lift from back of car via rear side door, clip on front pannier (already pre-loaded with the day’s gear), change footwear, kick scoot away, kick scoot back to car to check car actually locked. Much simpler than taking the bicycle. Usually.

The tide was out and Cramond Island was accessible, and also very tempting zone-wise, but I’d already decided to leave that for another day, together with the zones along the River Almond and on the adjacent Cammo Estate. Cramond Island is actually on my to-do-list. I want to cross over just before the tide covers the causeway and spend the day on the island, hopefully alone, until the next tide. Looks a good place to chill out, do some birding and photography. My first take of the day was zone ParkRunFinish, located along the Silverknowes Esplanade. In fact, the next five zones were all very similar, along as far as zone ShoreStart, so apologies for lack of variation in the zone gallery photographs. The Silverknowes Esplanade is ideal for kick scooting, with smooth fast tarmac and plenty space. Could be different matter when heading west in strong winds it being so exposed. 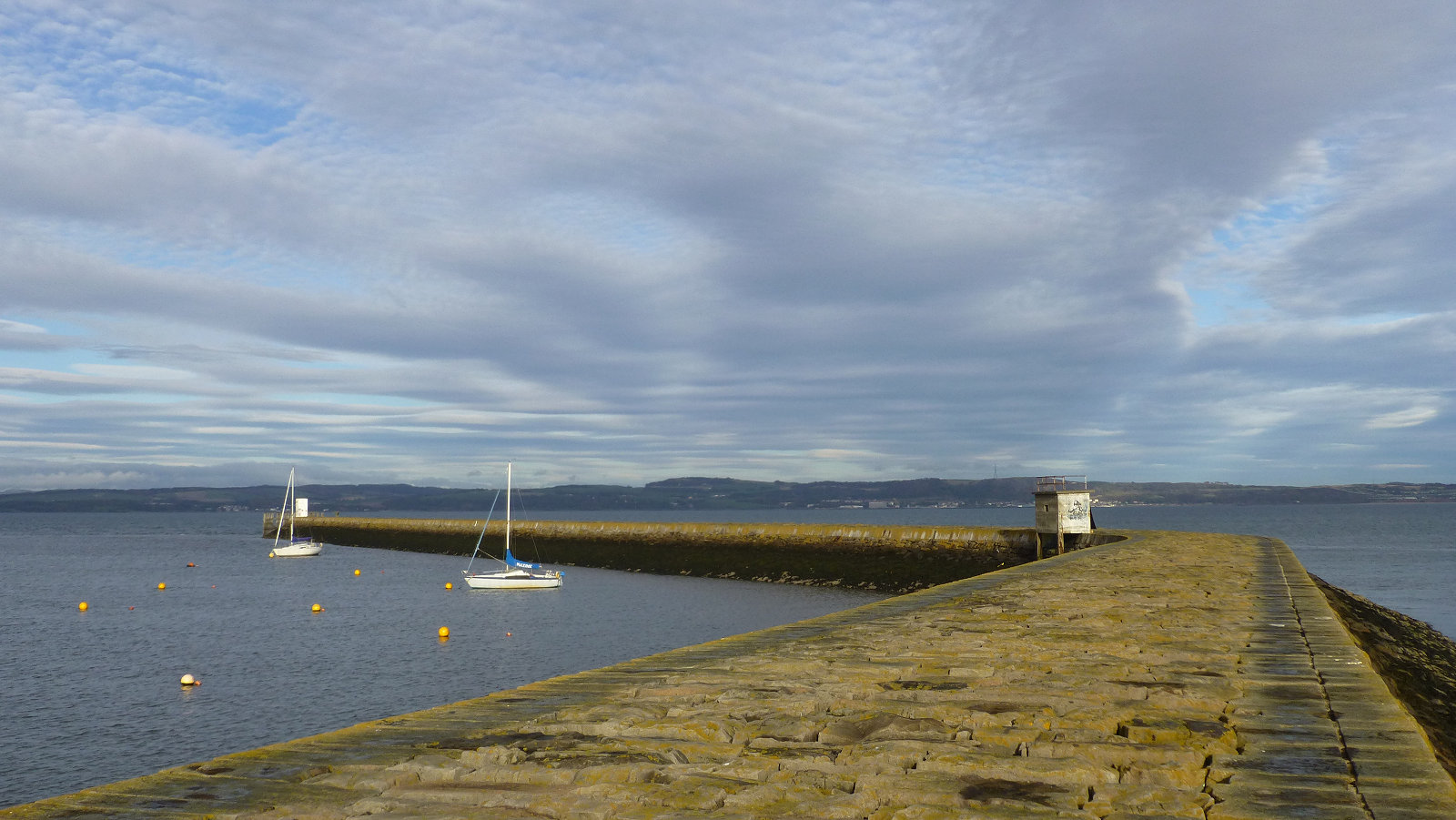 The bright yellow Swifty Zero was attracting a lot of attention, but strangely people seemed reluctant to catch my eye or even respond to a cheery hello, many totally blanking me. Back home on Bonnyrigg, everybody says hello to everybody. What a dour lot some residents of Edinburgh appear to be (all Edinburgh turfers excluded, of course). This was actually what I experienced throughout most of the morning. Only one young women actually replied when I said hello and even smiled. Perhaps, an almost 60-year-old male riding a bright yellow kick scooter is a threat? Who knows.

The Granton Harbour area was next, and the long walk out to the aptly named TheDamnZone, located way out at the furthest point on the Eastern Breakwater. It was too rough and slippery a surface to kick scoot safely, though could probably be cycled with care. The landward side is in better condition than the seaward side, being less exposed to wind and tide. Took about 15 minutes for the round trip. I noticed that turfer Rocky&Fed gave it a miss when turfing the area as I was returning along the railway paths. 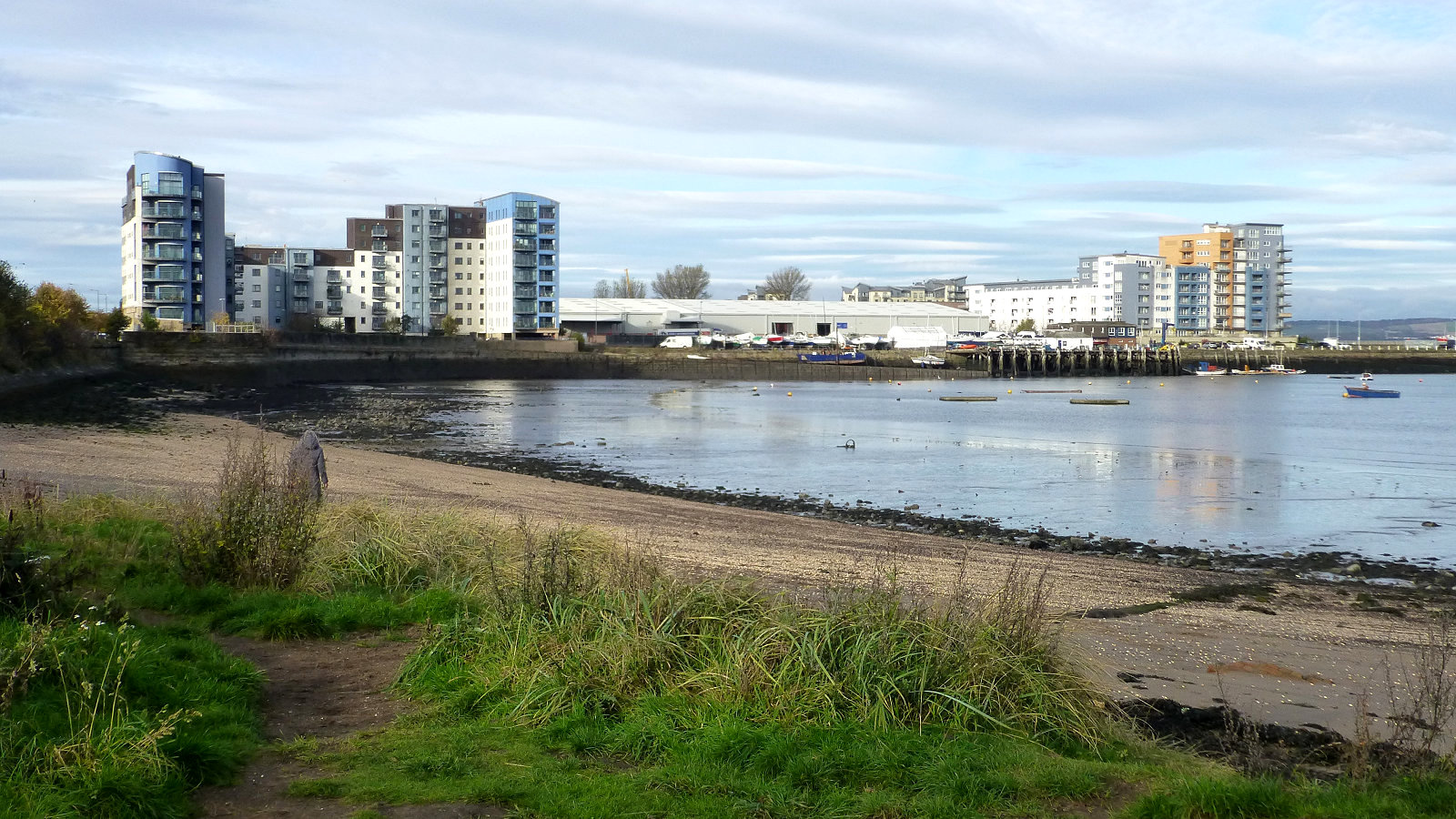 There was a bit of excitement at the roundabout near zone GrantonPark. A women driving a silver Ford Focus came around the roundabout and turned into West Harbour Road. I think her intention was to swing about and re-join the roundabout. However, she totally cocked it up and drove straight over the traffic island, including the meter-high bright yellow and white bollard. How you can fail to see that I cannot imagine. The bollard was largely unscathed, being squishy and spring mounted, but the front of her car was not so fortunate. Bits of grey plastic all over the place. Bet she was on the mobile phone!

The Western Harbour at Leith was next for a good five zones, followed by some pointless attempts to access the Hawthornvale Path at zone Hawthornvale. The path later becomes the Ferry Road Path, then the Telford Path. Found it eventually. Just hope the local turfers were not watching my silly antics. Guess going the wrong way or taking the long way round is the norm when you don’t know the area. I followed the path as far as zone Maidencraig, opposite Craigleith Retail Park, then swung right onto the Blackhall path. I must say, while railway paths are all good and proper, I do find them rather monotonous. Good smooth surfaces here though, except the final length of the Blackhall path, which is rough gravel. Seems to be a climb up from Leith before descending back down along the Blackhall path. 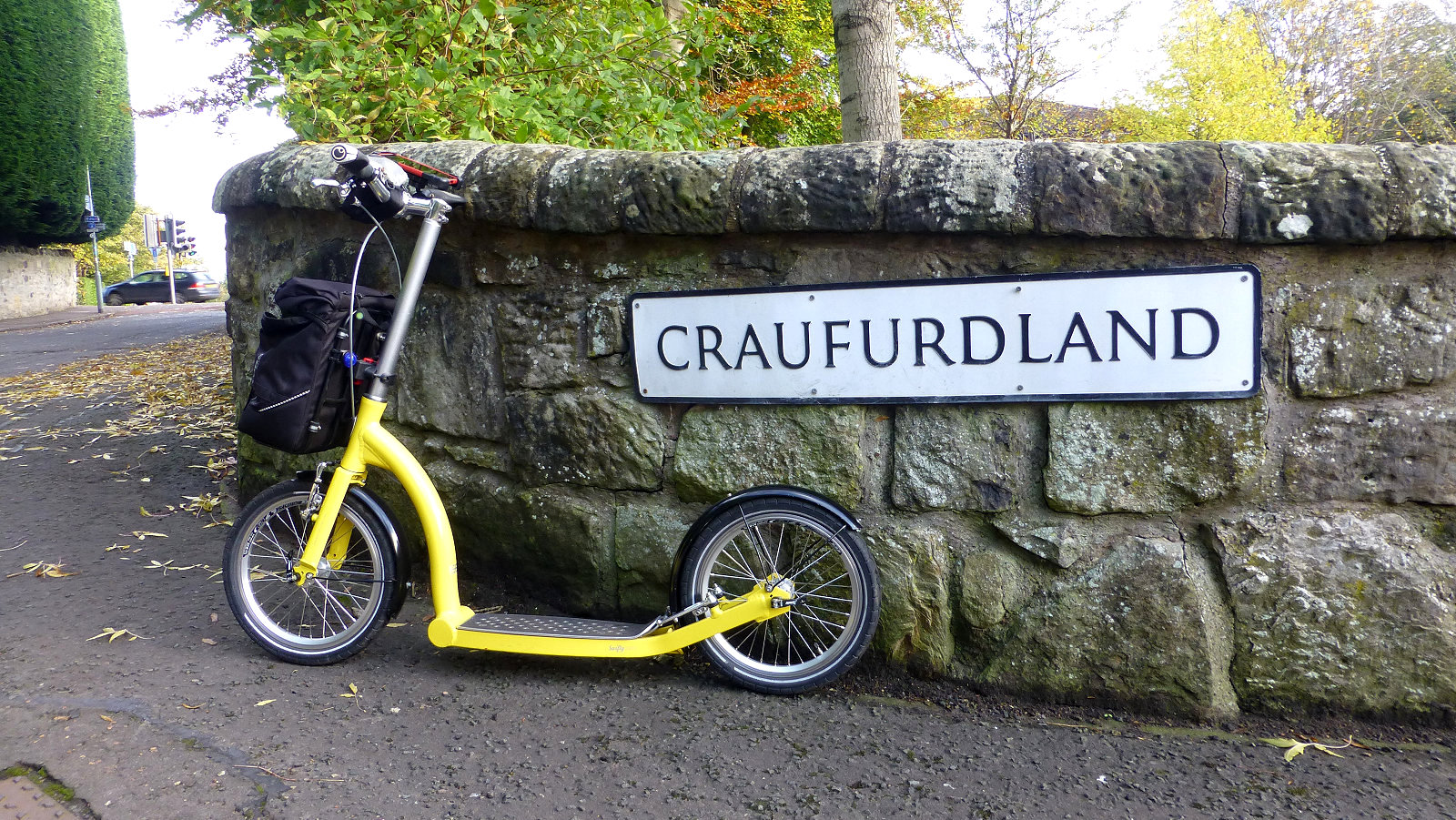 The Barnton area offered up a few further zones and I was soon back into Cramond with a final Roman zone, CramondFort, at Cramond Kirk, to finish off the day. Looking at the information board, the fort was some size in its day. Some really nice properties in this part of Edinburgh, must have cost a bob or two. Shame about the noisy aircraft coming in to land at Turnhouse airport. Not having been on the kick scooter much these past few weeks, I was fair knackered at the end and thankful of a sit down in the car. But still an enjoyable outing with 39 unique zones added to the total. Only another 1433 to go for that 2500 Unique medal. Better get turfing then!